AMERICA/PARAGUAY - Social Week 2022: The focus is on land rights and agricultural reform 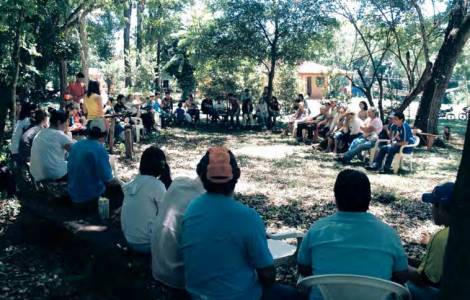 Asuncion (Agenzia Fides) - "Land ownership in Paraguay" is the theme of the "Social Week 2022" to be held from 25 to 27 October in the capital Asuncion, organized by the Episcopal Commission for Social Pastoral Care. The chosen topic touches on a particular aspect of social life in the country, which is the cause of numerous conflicts. The rights of the indigenous peoples have therefore long been the focus of interest for the Paraguayan Church. The Episcopal Conference and individual bishops have repeatedly stressed the urgency of a project to promote agrarian reform and called on all different sectors of society to engage in genuine dialogue on land tenure and property issues. It is estimated that 85% of Paraguay's agricultural land is owned by 2% of the population.
The issue of land rights has recently become a very contentious issue in Latin America, particularly in the Atlantic countries and the Amazon rainforest. In Paraguay, a law was passed increasing the penalties of the courts in order to curb protests by farmers.
Bishop Robledo Romero of San Lorenzo, on the occasion of the appointment of the first Cardinal of Paraguay, Adalberto Martinez Flores, at the last Consistory in August this year, pointed out that the situation in Paraguay is unknown to many and that its problems are partly historical: "The Indigenous peoples are the most disadvantaged. They are right, especially when it comes to land ownership. In Paraguay, we know that many of them have been deprived of their lands, which are of fundamental importance to them". In interviews after his appointment, the newly appointed cardinal also stressed that the problem of land tenure and property, as well as the situation of indigenous and peasant communities, requires intersectoral and interinstitutional dialogue in order to find peaceful, consensual solutions in line with social justice, as the Social Doctrine of the Church teaches.
In his capacity as President of the Episcopal Conference, the cardinal recalled last May in his message for the 211th anniversary of national independence from Spain that "the social and political reality of Paraguay challenges us as Christians. The country is marked by multiple forms of violence , emigration, poverty, corruption and impunity, democratic institutions are weak, drug trafficking and organized crime are on the rise". The President of the Episcopal Conference stressed the need "to start changing mentalities, attitudes and cultural practices that impede the achievement of the common good". Among the issues raised, he also mentioned "corruption, both public and private, which damages our trust and wastes resources necessary to improve the living conditions of people, especially in vulnerable sectors, of peasants and indigenous populations" (see Fides, 17/5/2022).
The Social Pastoral Commission - Caritas Paraguay has always been committed to addressing the issue of land ownership, taking into account historical, social and political factors, and involving all stakeholders in a calm dialogue, in justice and truth.
The topics that will be presented by various experts at Paraguayan Social Week 2022, from 25 to 27 October, include the reality of land ownership in Paraguay; land use: economic, social and political impacts; the commitment of the Church in the struggle for peasant and indigenous land; indigenous view of land ownership; environmental responsibility… On the closing day, four topics will be addressed: the land register; the register of rural properties; a legal framework; public policies for the use of land in a sustainable way. (SL) (Agenzia Fides, 24/10/2022)