EUROPE/ITALY - A Scottish woman, missionary in Egypt and the Middle East, at the head of the Comboni Missionaries 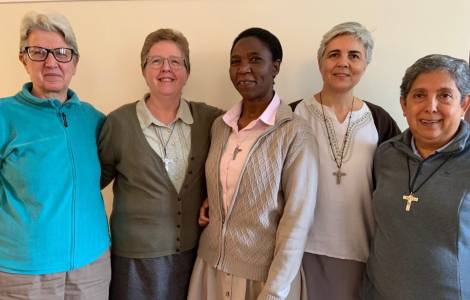 Verona (Agenzia Fides) - Sister Anne Marie Quigg is the new Superior General of the Institute of the Pious Mothers of Negritude (Combonian Missionaries), founded in 1872, 150 years ago, by Saint Daniele Comboni. She was elected during the XXI General Chapter, which began on October 1 in the mother house in Verona and will end on the 25th (see Fides 12/9/2022). Sister Anne Marie, 61, of Scottish origin, was a missionary in Egypt and the Middle East, where she worked in the field of education. She was currently in London, engaged in spiritual accompaniment. Today there are 1,017 Comboni Missionaries in the world from 34 nations (608 Europeans, 248 Africans, 157 Americans, 4 Asians), the average age is 70 years.
In the new general direction that will lead the congregation for the six-year period 2022-2028, she will be joined by Sister Maria de Los Angeles Funes Rodríguez, 61 (Mexican, missionary in Brazil), Sister Alicia Vacas Moro, 50 (Spanish , missionary in the Middle East), Sister Veronicah Wangui Mburu, 46 years old (Kenyan, missionary in Ethiopia) and Sister Eleonora Reboldi, 61 years old (Italian, missionary in Mozambique).
Thanking the sisters of the chapter for their trust, Sister Anne Marie highlighted the image of the boat, used during the works to reflect on the changes and reconfiguration that must take place in the near future. "We invite all the sisters to come aboard this boat, she said, sometimes the sea will be calm, other times it will be rough, but the journey has begun and must continue. It will also have to include a change of mentality, in order to be able to value the charism in the current context. Each of us will have to be open to understand what it means to be a Comboni missionary today". (SL) (Agenzia Fides, 22/10/2022)