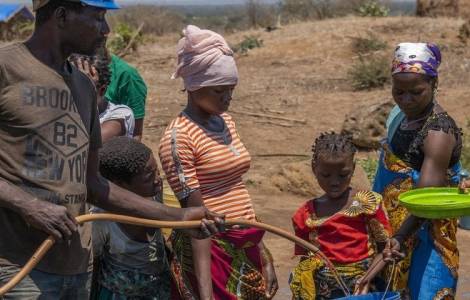 Maputo (Agenzia Fides) - In addition to gas and oil, the region also has graphite, an essential component of electric car batteries. The province of Cabo Delgado in northern Mozambique is an “energy paradise” for a world that is increasingly dependent on traditional or renewable energy sources. At the same time, the local population in the province has been suffering from ongoing violence for years.
Meanwhile, miners at the Twiggin mine near the town of Balama are on strike. The workers are demanding that their wages and health insurance be equal to those of miners at other mines in Mozambique. The mine at Balama, operated by an Australian company, has been designated as strategically important by the US Department of Energy as part of the US industry's policy of separating the U.S. industry from Chinese-made graphite. The graphite extracted in Balama is sent to a plant in Louisiana to be processed to build the anodes of the batteries for electric cars.
In the natural gas field, Mozambique plans to fill its first tanker with liquefied natural gas (LNG) to be exported from the Rovuma Basin, off the coast of the province of Cabo Delgado. Of the three LNG projects approved so far, the Coral Sul offshore platform, far from the armed violence in Cabo Delgado, will become the first to export gas from the world's largest reserves.
But the coincidence of the start of exploitation of the province's vast mining and energy potential and Islamist unrest in 2017 seems no coincidence. While the simplest explanation is that the local population (which is only a small percentage Muslim, while the rest of the country is 75% Christian) wants to benefit from the mining revenues, there are other, far more complex reasons .
"Among the residents of Mozambique, and particularly in the areas affected by the actions of the jihadists, the prevailing opinion is that this is a deliberate and well-organized strategy to expel them from their country," says Johan Viljoen, Director of the Denis Hurley Peace Institute (DHPI) of the Southern African Catholic Bishops' Conference (SACBC), in an interview with Crux . "There has never been a religious conflict.... It has nothing to do with religion," says Viljoen, according to whom "the easiest way to drive the people off the land is to foment this so-called insurrection". "People have to flee and the permission (which the government grants them to occupy the land) is canceled and the land can be given to multinationals," said Viljoen, who expresses the fear that with the search for new gas fields further south, violence will spread in that direction. "We are already seeing that the insurrection is spreading south in these areas. Is this a coincidence?" he concludes.
According to the UN High Commissioner for Refugees (UNHCR), around one million people have been forced to flee violence in the area over the past five years. (L.M.) (Agenzia Fides, 19/10/2022)

ASIA/MALAYSIA - After the severe floods, more than 70,000 people will experience Christmas as displaced persons