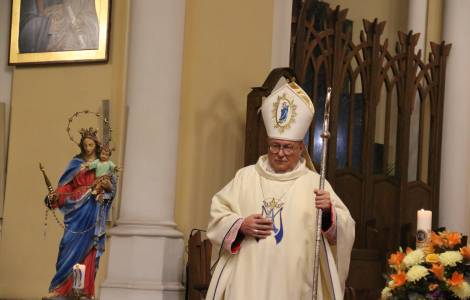 Moscow (Agenzia Fides) - "Bringing peace does not mean smoothing out all the roughness and leveling the differences. Bringing peace means accepting everyone, even those who think differently from us. Peace is above all the ability to forgive". Thus Monsignor Paolo Pezzi, Archbishop of the Archdiocese of the Mother of God in Moscow, yesterday evening, Friday, October 7, introduced the recitation of the Holy Rosary in the Catholic cathedral in Moscow, on the occasion of the feast of Our Lady of the Rosary. In communion with Pope Francis, the Archbishop led the prayer before the Eucharist exposed and, afterwards, he celebrated mass, with the intention of the gift of peace. In the current context, Archbishop Pezzi offered the faithful present in the cathedral and those who followed the recitation of the Rosary and the Eucharistic liturgy online a concrete description of who is the peacemaker: "A person who loves peace often seems weak, but in reality he is authentically strong, because he is able to maintain calm and clarity of thought, and he knows how to assign everything its place. In the hierarchy of values, the first place belongs to the awareness of being children of one God: awareness that is a guarantee of peace. Mary, You are the Queen of Peace, because everything that has happened in your life had its proper place". Then recalling in his homily the historical origins of the liturgical feast, instituted by Pius V in 1572 to commemorate the victory of the battle of Lepanto (October 7, 1571), the Archbishop underlined: "While fighting was taking place, Pius V had decided to pray and fast. We know how the battle ended, but perhaps not everyone knows that the great admiral of the Christian fleet warned the Pope of Rome that it was not the weapons or the prowess of the sailors that gave the victory, but the prayers of the Rosary".
Catholics present in the Russian Federation are less than 1% of the total population.
The Archbishop indicated prayer as a privileged and realistic act to be practiced in order to cope with the current dramatic circumstances, while a sense of powerlessness that leads to distrust seems to prevail: "We do not even imagine how great is the value of prayer in the eyes of God Jesus himself, in a well-known passage from the Gospel of Luke, speaks of this force and is amazed that His disciples do not believe in it. This temptation exists for us too. Today we are here to ask for peace, to ask for hearts to soften. (...) The same God, whom nothing can define and nothing can contain, desires to inhabit our hearts. And what do we answer? What answer do the people on whom, in some way, the fate of the world depends?
Today we want their hearts to be open, but it is necessary first of all that our hearts be open: only then will our prayer be true, it will be for the good of all men. Not for the realization of our designs, but for the fulfillment of God's plan".
The Archdiocese of the Mother of God, led by Archbishop Pezzi, covers an area of 2,629,000 km² and includes about a hundred communities. (CD) (Agenzia Fides, 8/10/2022)

ASIA/INDONESIA - Indian Jesuit Father has been living in Sumatra for 50 years: a life marked by devotion to Mary and love of God