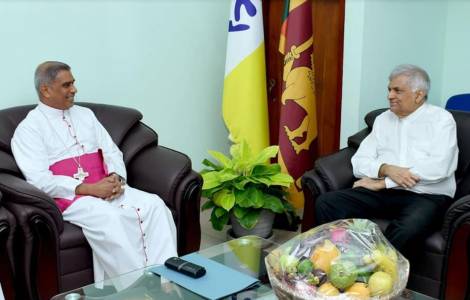 Colombo (Agenzia Fides) - The concerns of the Christian community, the ways to face the economic and political crisis, the contribution of religious communities, and of Christians in particular, to the common good, truth and justice: were the themes at the center of the conversation that yesterday, October 2, Harold Anthony Perera, Bishop of Kurunegala and President of the Bishops' Conference of Sri Lanka, held with the President of Sri Lanka, at the Bishop's residence in Kurunegala, capital of the homonymous northwestern province. After the meeting, the President and Msgr. Perera said they had "a fruitful discussion", in the interest of the nation and the people of Sri Lanka, which is going through a very difficult phase in its history, marked by the economic and social crisis and the lack of basic necessities. This is the first meeting between the president of the Catholic Bishops' Conference and the country's President Wickremesinghe, who assumed the presidency of Sri Lanka on July 21, at a very turbulent time for the nation.
The unprecedented anti-government demonstrations and protests in the nation of 22 million people - which have rocked the country for months beginning in the spring of 2022 - have now subsided, but economic problems, inflation and shortages of fuel and medicine remain serious, while with the prices of other basic necessities skyrocketing, the country faces a financial crisis that remains unresolved.
Karu Jayasuriya, former president of the Parliament, said that today, Sri Lankans with financial and professional means who can move abroad are leaving the country: more than 500 doctors have left the country in the last eight months, the same goes for with the engineers. We are losing the future national resources of the country" Jayasuriya said.
The Catholic Church has also pointed out the worsening of the economic crisis, noting that the middle classes are getting poorer day by day, people do not have access to food and struggle for daily survival. Niroshani Sumudu, a Catholic teacher, points out that many children no longer bring breakfast or lunch to school because "parents cannot afford to give them nutritious meals", as confirmed by UNICEF, which points out that 2.3 million children in Sri Lanka need nutrition aid.
On the other hand, in the "truth and justice" approach that the Sri Lankan Catholic Church has always defended, especially with regard to the 2019 Easter massacres, there has been a step forward: in recent days, a court in Colombo has put former President Maithripala Sirisena on the register of "suspects". The former head of state will have to appear in court and will be questioned on October 14. The magistrate accepted the complaint filed by the Catholic priest Fr. Cyril Gamini Fernando and Jesudasa Ganesan, who suffered serious injuries and the amputation of a leg in the attack on April 21 three years ago in the church of St. Anthony of Kochchikade, in Colombo. For the judge, the complaint has a legal basis and provides for the inclusion of the former president in the register of suspects.
Maithripala Sirisena is accused of negligence in the performance of his duties, since in the days prior to the attack he had received intelligence information warning of a possible attack during Holy Week. However, he did not order any reinforcement of security measures. (PA/SD) (Agenzia Fides, 3/10/2022)