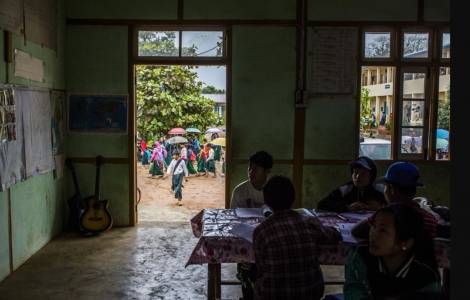 Yangon (Agenzia Fides) - "Today the Catholic community in Myanmar lives in a painful climate of violence. The fighting continues. Life is difficult and precarious. The people are exhausted in the face of the ongoing violence", said Auxiliary Bishop of the Archdiocese of Yangon, Noel Saw Naw Aye, to Fides. "We Bishops too, at the head of the community of baptized, are in an extremely difficult and delicate situation: on the one hand we have to deal with the military who are in government, on the other we have to take care of the sufferings, requests, needs of the people. Of course, we are always on the side of the population, but we are also called to dialogue with political leaders and army leaders only in order to avoid greater suffering and violence against the people", explains the Auxiliary Bishop to Fides.
"As Catholics, we are all united against war and against all forms of violence, we try to preach and live evangelical non-violence, peace and reconciliation", he emphasizes and demands that places such as schools, churches, places of worship or social institutions or refugee reception centers, be spared from the fighting.
Referring to the appeal released by the Pope yesterday, September 25, the Burmese Catholic community says "it always thanks Pope Francis who never misses an opportunity to remember us in prayer and in his appeals for peace".
"We see that in today’s world there is a trend for bombing schools", Pope Francis said yesterday during the Angelus delivered at the end of Mass at the stadium of Matera (Italy), at the conclusion of the National Eucharistic Congress. "I think, in particular, to many problems in the world and to Myanmar", Francis remarked, recalling that "for more than two years that noble country has been martyred by serious armed clashes and violence, which have caused many victims and displaced persons. This week I heard the cry of grief at the death of children in a bombed school. We see that in today’s world there is a trend for bombing schools", added the Pontiff, hoping that "the cry of these little ones not go unheard!" (PA) (Agenzia Fides, 26/9/2022)