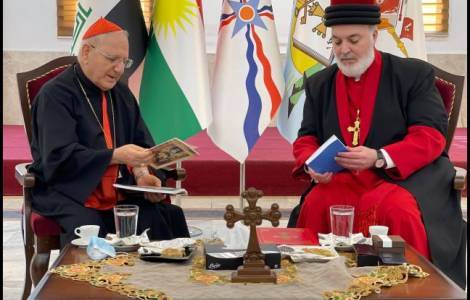 Baghdad (Agenzia Fides) - "I have studied our Eastern heritage and the writings of the Fathers of the Church and I see nothing to prevent the union of the Chaldean Church and the Assyrian Church of the East under the name Church of the East", says the Chaldean Patriarch and Iraqi Cardinal Louis Raphael Sako, who wishes to initiate a common and fraternal reflection on the possible restoration of full sacramental communion between the Chaldean Church and the Assyrian Church of the East. He does so in a long and dense speech entitled "The unity and plurality of the Church", in which, among other things, he adds that "the same thing is true for the Syriac Catholic Church and the Syriac Orthodox Church", which according to Patriarch Sako could unite under the name of the "Syrian Church of Antioch", as they share the same roots and the same liturgical, historical, linguistic and spiritual heritage.
Cardinal Sako, however, in his contribution, disseminated through the official channels of the Chaldean Patriarchate, also presents these proposals as a mere "personal opinion". At the same time, the contribution provides solid arguments which are the doctrinal and theological sources on which the return to full communion is based between some Eastern Catholic Churches and the ancient Churches of the East, which share the same liturgical, theological and spiritual heritage and which, although not in full communion with the Pope, have never had direct dogmatic conflicts with the Church of Rome and her Bishop.
"The Churches - argues Patriarch Sako at the beginning of his speech - have developed in different cultural, linguistic and geographical contexts, even if they share the same apostolic faith. Ecclesial unity is not the product of human organizational processes or of a parliamentary attitude, and it does not impose itself as a conformist adherence to a single model imposed from above in order to repress legitimate and fruitful differences that undermine the intensity of ecclesial life and apostolic mission enrich as gifts". "The essential unity between the Catholic Church and the ancient Eastern Churches of apostolic origin", stressed Patriarch Sako, "is also shown objectively in the common Christological declarations which these Churches have signed in the last decades of their ecumenical journey". "This unity of faith," said the Iraqi cardinal, "is real, not fictitious, and everyone recognizes it. It is a prayerful unity that is revealed even more clearly when it is reflected in the plurality of administrative, hierarchical and cultural possibilities is lived and recognized", because "what unites us is much greater than what divides us". "The source of unity between the Catholic Church and the ancient non-Catholic Churches of the East", added Patriarch Sako, lies in the common belonging to the apostolic Tradition. The potential fruitfulness of the ecumenical journey, especially when it is lived on the concrete ground of communion between Christians in their parishes and dioceses".
Patriarch Sako added that the urgent need to reflect on a possible "project of unity" within the framework of a bold dialogue stems from the "state of affairs in which so many Christian communities in the Middle East find themselves, characterized by processes of emigration, which have forced our people to disperse today in the 'Diaspora'". In his contribution, the Iraqi cardinal also concludes by highlighting the fact that the Assyrian "sister Church" led by Patriarch Mar Awa III (in the photo together with Patriarch Sako) already referred to as "Holy Assyrian Catholic Apostolic Church of the East" in official statements on the occasion of the inauguration of the new Patriarchate on September 12 in Erbil. (GV) (Agenzia Fides, 20/9/2022)