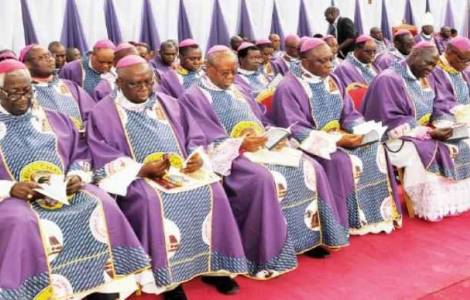 Abuja (Agenzia Fides) - "The level of insecurity in the country is very worrisome. We are passing through what might be deemed as the darkest chapter of our history as a nation", warns Mgr. Lucius Iwejuru Ugorji, Archbishop of Owerri, President of the Bishops' Conference of Nigeria (CBCN), in his opening speech at the second Plenary Assembly of Nigerian Bishops, which is being held at the Sacred Heart pastoral center of Orlu, in the State of Imo.
"Extreme poverty, soaring unemployment rate, spiralling inflation, a collapsing economy, with ever increasing debt burden, and worsening insecurity have combined to complicate the plight of the average Nigerian, who appears condemned to a life of intolerable hardship and undeserved misery", says Msgr. Ugorji.
The number one cause of concern for Nigerians is rampant insecurity. "The country has continued to bleed endlessly as a result of the ungodly activities of insurgents, bandits, militant herdsmen, unknown gunmen, kidnappers and trigger-happy security agents. Nowhere seems safe anymore. Homes, farmlands, markets, highways, places of worship and presbyteries have all been turned into kidnapping and killing fields".
Due to the fact that young people do not have a future in Nigeria, they are looking for the path of illegal immigration as Msgr. Ugorji recalls: "The other side of the story, which is more of a national disgrace, consists of thousands of young men and women, who in search of greener pastures, embark on perilous journeys to Europe across the Sahara Desert. Along the way, some die and are buried in unmarked graves". "This despicable modern day slavery is booming because it has become a lucrative business and also as a result of the high level of corruption underpinning it".
The Archbishop called on dioceses, parishes and church organisations across the country to help raise awareness on this evil, adding that one of the most effective ways of stemming migration, brain drain and human trafficking is through good governance. "We also urge dioceses and all people of goodwill to take the upcoming 2023 general elections seriously. We must all brace up to share our values on good governance based on the common good, and use our votes to elect people of unassailable integrity who have the character, competence, capacity and track record to lead our nation out of the present economic doldrums", he asked.
Speaking at the opening of the Assembly, the governor of the State of Imo, Hope Uzodinm, however, urged the priests to desist from meddling in active politics. "I wholly understand that priests have the right and duty to hold our leaders and governments accountable, and nobody will ever stop a priest from condemning the ills in the society, including bad governance and corruption", he said, but added that "It is important that you reaffirm the church’s neutrality on political matters and, thereafter, caution the priests not to dabble into partisan politics", because - he adds - the Church would lose its moral authority if it allowed itself to be drawn into party politics. (L.M.) (Agenzia Fides, 12/9/2022)

ASIA/IRAQ - The alarm of Chaldean Patriarch Sako: world crisis and war in Ukraine aggravate the "alarming" exodus of Christians from the Middle East

AFRICA/ANGOLA - President of CEAST: "May tomorrow's vote take place in a spirit of peace, reconciliation, unity and fraternity"