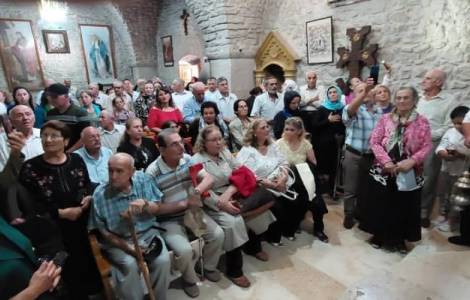 Idlib (Agenzia Fides) - Mass was celebrated in a church that had been closed for ten years. This happened in the province of Idlib, in an area still controlled by the anti-Assad Islamist militias. Permission to re-open the Christian place of worship and celebrate the Eucharistic liturgy in a serene and festive atmosphere was the same head of the jihadist faction that, in past years, had seized property and the houses of Christians as "spoils of war".
This event is emblematic of the real situation experienced by the Christian communities in this region of Syria.
On August 28, after a ten-year suspension - according to newspapers such as al Monitor and Independent Arabia - the Christians still present in this area were able to celebrate mass in the Armenian Apostolic Church of Saint Anne, in the village of Yacoubia, in the countryside northwest of Idlib. There, the feast dedicated to Saint Anne, the mother of the Virgin Mary, was traditionally celebrated on the last Sunday of August.
For ten years, since this area fell under the control of jihadist militias, the church has been closed, and in recent times it has also served as a refuge for refugees. Dozens of Christians from different denominations attended the liturgy, footage of which was released by the same Islamist militias that control the region.
On July 19, Muhammad al Jawlani, head of the militia of Hayat Tahrir al Sham - "Organization for the Liberation of the Levant", a jihadist formation known in the past as Jabhat al Nusra - met with representatives of Christian communities still present in the villages of Qunaya, Yacoubia and al-Jadida, and announced its intention to "protect" their liturgical celebrations, also guaranteeing the gradual restitution of real estate seized in recent years from Christian owners. Tharir el Sham militiamen - local sources report - set up roadblocks near the village during the celebration, in order to ensure the peaceful unfolding of the liturgy.
The action of al Jawlani and the Tahrir al Sham militiamen has been the subject of different assessments. Other Salafist Islamist formations such as Hurras al Din, still explicitly linked to Al-Qaeda, accused Al Jawlani of making the province of Idlib "less Muslim".
For analysts and observers of the troubled Syrian events, the choice of Tahrir al Sham must be read in the light of the strategy, also in the media, of repositioning initiated by that Islamist group to clean up its image and internationally accredit its evident "moderate turn".
Tahrir al Sham militiamen are now issuing statements in which they support the need to begin integration between the different religious communities present in the province of Idlib, opening "a new page" and noting that Islam does not prohibit non-Muslims - including Christians - to practice their rituals freely.
In 2013, Al Jawlani himself was labeled a "global terrorist" by the US State Department. Now, even analysts linked to US think tanks are also following with interest the internal evolution of the groups in the jihadist galaxy. Aaron Y. Zelin, in an analysis by Hayat Tahrir el Sham available on the Washington Institute for Near East Policy website, writes that now "Jawlani is no longer just a leader of a terrorist group or insurgent faction", but also the representative of a turn that includes a change of attitude towards the United States. "According to Ambassador James Jeffrey, Washington’s former special envoy for both Syria engagement and the Global Coalition to Defeat ISIS", Zelin said, "Hayat Tahrir al Sham allegedly used backchannels to send U.S. officials the following message: 'We want to be your friend. We are not terrorists. We are just fighting Assad. We are not a threat to you'".
In the power games in northern Syria in which Assad's army, groups from the jihadist galaxy, regional powers such as Turkey and world powers such as Russia and the United States participate, the miracle of the Christians who, amid the bloody convulsions in that area, have continued to confess their faith in Christ, giving glory to His name. (GV) (Agenzia Fides, 8/9/2022)