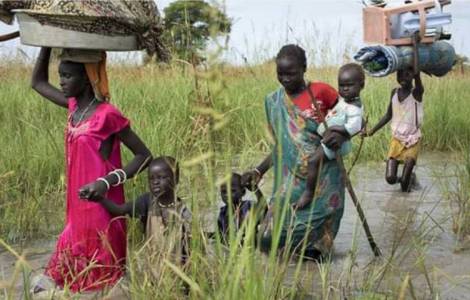 2022-12-13
Overcoming Ethnic Conflicts: Education as an Instrument of Peace

Yei (Agenzia Fides) - "Murders and violence are still ongoing, although not as frequent as in 2016-2018. There are street raids and robberies by armed men, killing of peasants on their farms by armed shepherds ( especially in the Equatoria region), cold-blooded killings of clerics and perceived political opponents, lengthy imprisonments without trial of suspected criminals Recently, a new rebel movement called the Sudan People's Liberation Movement (SSPLM) has emerged in Upper Nile State, many people have lost their lives in recent months. In the face of such atrocities, the country's politicians must show political maturity by ensuring security, engaging in dialogue as the best way to resolve disputes, improving basic necessities in education, health and and food production, and stopping harassment to civilians by military personnel". Speaking with Fides, Msgr. Alex Lodiong, Bishop of Yei, in South Sudan, makes no secret of his concern at the situation in his home country, which is plagued by conflicts that, despite some significant advances in recent years, have been slow to abate.
"The situation," said the bishop, "is still not the best. The economy is suffering, prices on the market have been rising lately. Civil servants are not paid regularly and are therefore unable to provide for their children's education, health and daily living. Only high-ranking government officials, high-ranking army officers and employees of international non-governmental organizations (especially the UN) can afford a decent living. They can pay for education at reputable schools abroad.
In some areas of South Sudan, including my diocese, there are no functioning schools and children born in the last ten years have never attended school. It is a very serious fact".
The Pope has always followed the fate of the youngest country in Africa (born in 2011 following a separation from Sudan, ed), since 2013, where 82% of the population still live below the poverty line. Due to his health condition, he was unable to make the trip originally planned for early July: "Unfortunately, the expectations and enthusiasm of the Christian faith community for the visit of the Pope have diminished. People expected words of encouragement from the Pope's visit and exhortations to the government to keep peace and economic stability. Nevertheless, they remain confident that the Pope will visit the country as he promised. The Pope's symbolic kiss at the feet of our political leaders certainly has not borne the fruits we all hoped for. Our politicians seem to have ignored the desire of the people of South Sudan for peace and economic stability”.
During his solidarity visit - which took place after the Pope's visit had been postponed - Cardinal Pietro Parolin made an urgent appeal to the people of South Sudan to end the violence and to work for peace with concrete actions: "May the Lord touch the hearts of all, above all of those who have authority and great responsibility, so that the suffering caused by violence and instability may end and the process of peace and reconciliation advance quickly with concrete and effective actions," said the Cadinal. "We hope this message bears fruit ", added the bishop, "so that when the Pope comes to South Sudan, he finds the South Sudanese returning from exile".
Bishop Lodiong recently visited refugee camps inside and outside South Sudan and called for "silencing outbreaks of violence and ethnic divisions". "There are more than 1.1 million refugees in Uganda and the Democratic Republic of the Congo," he said, "according to rough estimates I received during my visits to the settlements in these countries. They are struggling to make a living: Food rations are being cut every year and the host society (particularly in Uganda) is not giving them land for agricultural production to supplement UN rations.”
"Besides," he notes, "refugees can't pay college tuition on their own. But there aren't many aid organizations that offer scholarships to refugee children who qualify for college at their secondary schools.
These problems are added to those related to ethnic affiliations, as happened in some camps in Uganda in the recent past. The government of Uganda, through its refugee aid organizations, is doing its best to help the refugees remain peaceful among themselves despite the challenges they face". (LA) (Agenzia Fides, 6/9/2022)