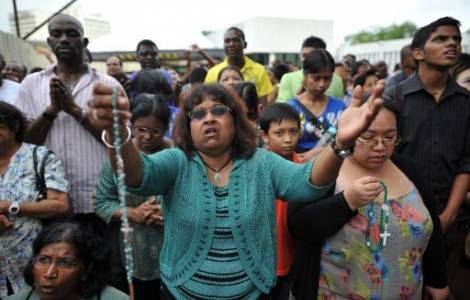 Kuala Lumpur (Agenzia Fides) - Helping to create a "more united and stronger" nation is the mission of Christians in Malaysia. The Christian Federation of Malaysia, which represents the communities of the different faiths in the country, including the Catholic Church, "puts its energies at the disposal and continually prays to God for abundant blessings for the country," reads a statement sent to Fides.
In the message issued on the occasion of the 65th anniversary of "Hari Merdeka" (National Day), which commemorates both the Malaysian Declaration of Independence (August 31, 1957) and the 59th anniversary of the establishment of the Federation of Malaysia (September 16 1963), Church leaders, including Kuching Catholic Archbishop Simon Hoon Seng Poh, note: "Malaysians have grown stronger together in resisting the terrible impact of the pandemic. We are reeling from the deadly effects of the virus, which has cost many lives. Mental health problems have affected many. Others have lost jobs and income, and the nation has suffered an economic slowdown". Only recently has the economy shown signs of growth and improvement. However, the text points out, citizens continue to face external headwinds that have increased prices and the cost of living, harming everyone.
Christian leaders praise the new Prime Minister, Ismail Sabri Yaakob, who has announced the political theme of his government, "Keluarga Malaysia" ("Malay Family"), which is intended to emphasize a national unity approach. "This is commendable, as it focuses on economic, trade and social policies for a common effort that generates an economic recovery for all", it notes.
"We need each other and continue to embody our national motto 'Bersekutu Bertambah Mutu' (Unity is strength). Our frontline doctors and volunteers have worked tirelessly to provide safety and health, and some of them have given their lives to do so. Often, in situations of indigence, neighbors have shared what they had," church leaders recall.
The Prime Minister has also promoted the Islamic concept of "tasamuh", tolerance or open-mindedness, to ensure peace, harmony and unity of the nation. The Christian Federation states: "We strongly encourage the government and all citizens to go beyond tolerance and mutual respect, to celebrate the pluralism and diversity of our ethnic groups, cultures, religions and languages, and thus build the strong ties of friendship between us as a Malaysian family".
"We urge the government to continue to care for all needy and marginalized Malaysians, especially the poor in urban suburbs, those with disabilities, indigenous peoples", the text continues. In fact, it is noted, "by taking care of the needy, we show that we are truly a Malaysian family, because every family takes care of its members, starting with those who require the most care. We appreciate the action of the government, which has included 12 more groups in the category of 'vulnerable groups', among which are the homeless and the stateless. We hope that these fair and equitable policies will lead everyone to enjoy the fruits of belonging to the Malaysian family", reads the statement sent to the Fides.
"At the same time, let us not forget that many people have died in police cells and immigration detention centers in suspicious circumstances, and their families deserve clear explanations," the Christian leaders point out.
They also call for attention to health policies and retirees: "The White Paper being prepared by the Ministry of Health must aim at a health system that can meet the needs of all during a pandemic crisis and address the challenges of the aging of the population in Malaysia", asks the Federation, recalling the extremely negative social impact of climate change, food and water scarcity and the need for a safe environment for all.
"We need our government leaders to be united in focusing on the good and welfare of the Malaysian family and not fighting for their own personal and party interests. Therefore, we welcome the Memorandum of Understanding on Political Transformation and Stability so that the people benefit from a stable Parliament and from the promulgation of good legislation, voted by all the parties", always with the aim of "guaranteeing the peace, harmony and unity of the people".
For this reason, the Christian leaders and faithful of all confessions assure that they pray to God "so that he grants wisdom, strength, courage and good health to the rulers, so that they know how to serve the people with integrity and determination to seek the common good ofthe nation". (SD/PA) (Agenzia Fides, 5/9/2022)