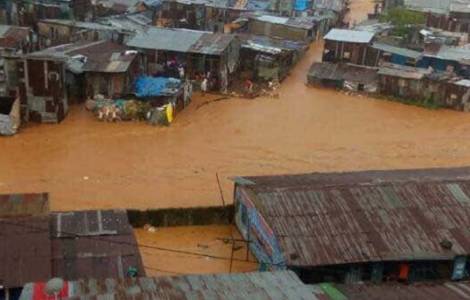 Freetown (Agenzia Fides) - From August 14 to 17 and August 27 to 28, 2022, Sierra Leone was affected by a series of floods that devastated some areas of the country, leaving more than 10,000 people homeless. Caritas Freetown, in a statement to Agenzia Fides, offered a provisional toll of the victims and the damage suffered in 18 communities in the western region of Sierra Leone. “We are sharing our interim assessment with other partners in order to collaborate with each other,” explained Father Peter Konteh, Executive Director of Caritas Freetown. The most serious episodes were recorded in the second wave of torrential rains in recent days that, among the many damages, left victims, wounded, homeless people, houses trapped in the mud and unusable electricity poles.
According to estimates by Caritas Freetown, thousands of people need assistance such as emergency items for pregnant women, young people and sick people who are left with nothing. Blankets, mattresses, clothing, footwear, hygiene items and first aid supplies are also lacking. The most pressing challenge is relocating people made homeless by rainfall and landslides. The next step will be to help those whose houses have been badly damaged and inundated with mud.
"The slum dwellers who live along the hillsides are the most affected," said Father Konteh, who attributed these frequent natural disasters in Sierra Leone to the destruction of the environment and the lack of housing in the area. "Houses have been built where they should not have been built, thus impeding the natural flow of water when it rains. There has also been massive deforestation, which has left the land bare and susceptible to flooding", the priest reiterated.
A survey conducted by Caritas Freetown in Culvert, in particular, indicates that the suburbs are also exposed to piles of garbage, disease and malaria especially during the rainy season. Despite the numerous studies conducted and shared by Caritas Freetown, little is being done by the government to provide a sustainable solution. (AP) (Agenzia Fides, 2/9/2022)