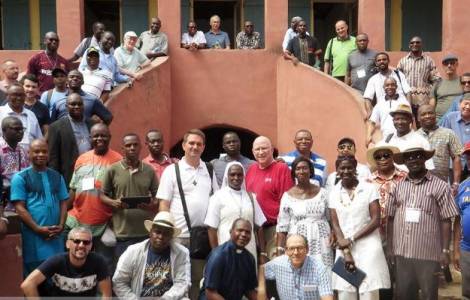 Bangui (Agenzia Fides) - "The Spiritan missionaries in the Central African Republic work to heal hearts and rebuild people's daily lives, preaching and living the Gospel in its entirety. Despite the limited resources and means, they try to rebuild people's lives spiritually, educationally, materially and in terms of health. They are also involved in the formation and accompaniment of young people and organize camps and seminars to raise awareness on education for peace and coexistence," says Father William Doctor, Provincial Superior of the Congregation of the Holy Spirit (the so-called "Spiritans") in Central Africa, in a video message to Fides, in which he speaks about the missionary commitment in the African country and the challenges that the religious there have to face every day. The first group of Spiritan missionaries came to Central Africa in 1894 at the initiative of Bishop Prosper Augouard, who was then in charge of the French province of Congo. Today the religious, 29 in number, are active in the Archdiocese of Bangui and in the dioceses of Mbaïki, Bangassou and Alindao. "The missionary work of the Spiritans in Central Africa," explains the provincial superior, "corresponds fully to the charism of the Congregation: first evangelization in urban and rural areas, in the outskirts, where the missionaries' concern for the poorest is expressed above all". The Spiritans have made a fundamental contribution to the founding and consolidation of the Catholic Church in the Central African Republic: "The religious province has done a lot for the establishment of extra-parish mission stations through educational and health organizations, such as the Manicus School in Mobaye, the Daniel Brottier School in Niakari, two colleges in Bangui, and the Voice of Hope Center, which provides support, education and rehabilitation for street children in Bangui", the missionary said.
"The pastoral work in some areas is very difficult," says the provincial superior, "rural parishes are made up of small towns and villages scattered in the surrounding forests. Access to the villages is difficult, especially in the rainy season. The people are poor and poorly educated. There is a need for proclamation and catechesis at all levels". The province of the Spiritans in the African country lives mainly from the financial support of local and foreign donors: "But the confreres," explains Father Willam, "have also taken income-generating measures to cover the daily needs of the mission. God's providence is with us ". The religious tells Fides: "Despite the crisis situation in the country, our Province welcomes vocations and students, also from other areas, for missionary formation in the Formation House, the Postulancy in Bangui. Here missionaries, young religious and seminarians are also involved in the fields catechism, youth animation, evangelization and charitable activities". "There is still a lot to be done", he concludes, "it is very important to look at the many young people who are in training,
at the shy but encouraging positive reactions of the local people, who need to be encouraged and helped. We Spiritans - he concludes - have a mission to respond to the call and mission that God has entrusted to us by sharing with everyone the Gospel message of love, in accordance with the charism of our Founder, Claude-François Poullart des Places, placing Christ at the center in the face of the challenges this country and this society are putting before us". (ES) (Agenzia Fides, 27/8/2022)