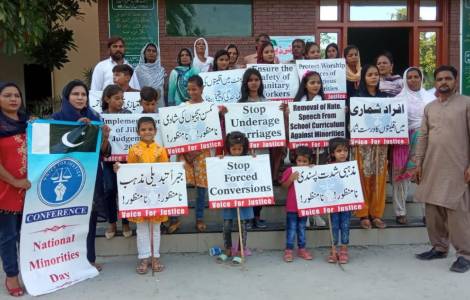 Islamabad (Agenzia Fides) - The government must introduce legal and administrative guarantees to protect minorities from human rights violations, take serious measures to stop forced religious conversions, prevent the misuse of blasphemy laws and allocate 5% of jobs to religious minorities. These are some of the requests made at the public conference organized yesterday, August 11, in Karachi by the non-governmental organization 'Voice for Justice' on the occasion of the National Day of Minorities (see Fides 10/8/2022).
The spokesman for the NGO, Ilyas Samuel, assured during the meeting: "We ask for legal and administrative assistance. We want to realize the Pakistan promised by the founder of Pakistan Muhammad Ali Jinnah, where everyone has freedom and equal rights". Citing blasphemy cases, Ilyas Samuel recalled that "Most blasphemy cases, which are often suffered by Christians, are based on fabricated accusations that make the accused face several years in prison; on the contrary, the complainant who presents false accusations enjoys impunity. Sometimes the accusation translates into tremendous violence against members of minority communities".
"Our society - explains Samuel to Fides - has been intoxicated by hatred, discrimination and extremism due to inertia on the part of the government machine, which has caused an increase in episodes of intolerance and violence in the name of religion. It is urgent to intervene against those who attack religious minorities".
For her part, Nuzhat Shireen, a Muslim and president of the Commission on the Legal and Social Status of Women in Sindh province, assured: "The founder of Pakistan, Muhammad Ali Jinnah, imagined that Pakistan would become a peaceful country, where there would be no discrimination, no intolerance and no violence and all citizens could enjoy the same rights and the same opportunities, free to practice their faith. Today the government must introduce reforms in laws and policies that affect minorities".
Naghma Shiekh, a well-known women's rights activist, added: "All citizens are guaranteed the right to religious freedom in Article 20 of the Pakistani Constitution. It is illegal and immoral to force them to change their faith by resorting to threats, coercion or manipulation." "The lack of enforcement of existing national laws remains a fundamental impediment to preventing forced religious conversions and allows perpetrators to commit crimes under the guise of faith conversion and marriage," she said.
Jaipal Chabbria, a Hindu leader and member of the Commission for National Minorities, also spoke at the same press conference, calling for respect for the rights of religious minorities, observing: "It is necessary that institutions and citizens openly accept religious diversity and equality of status between citizens of different religions and it is up to the federal and provincial governments to fill the gaps in governance and address the serious problems that minorities face in Pakistan".
Christian Naveed Anthony, a member of the Sindh Provincial Assembly, highlighted the problems in the field of employment for religious minorities: "The provision to reserve 5% of jobs for minorities must be implemented effectively. The government should promote educational centers for marginalized communities so that they can meet the eligibility criteria for decent jobs".
In order to ensure equal religious rights, freedom and tolerance in accordance with the Constitution of Pakistan, 'Voice for Justice' together with the leaders of various religious minority communities has called on federal and provincial governments a Memorandum calling for the following measures to be taken to improve the lives of minorities in Pakistan:
• Adopt effective measures for the protection, promotion and fulfillment of the rights of minorities, particularly in the context of the reform of the civil and criminal justice system in order to make it more sensitive to the needs of victims of minority communities.
• Establish a committee of experts made up of jurists and human rights activists to review the bill that introduces guarantees against forced religious conversions, in accordance with international human rights standards.
• Study a bill to modify the law on the restriction of child marriage and submit it to the national and provincial legislative assemblies, to ensure that the minimum age for marriage is set at 18 years and marriage with minors is declared null. As a provisional measure, the validation of any marriages associated with religious conversions of faith by magistrates must be suspended;
• Present in national and provincial legislation a bill that classifies forced conversions as a crime, establishing permanent commissions in Parliament.
• Guarantee that reports of forced marriages and conversions are investigated independently, impartially and quickly, guaranteeing the right to a fair trial and access to justice for victims.
• Ensure that all those who incite or commit acts of violence against others based on accusations of blasphemy, as well as those who falsely accuse others of blasphemy, are brought to justice and duly punished.
• Review the curricula and textbooks adopted in public schools to ensure that education is a tool to promote diversity and social cohesion, in accordance with article 22 of the Constitution of Pakistan, which guarantees that "no person who attends an educational institution must receive religious instruction other than his own".
• Introduce in public schools a subject of religious and ethical education, an alternative to the study of Islam, to allow minority students to know and study their respective religions. (AG/PA) (Agenzia Fides, 12/8/2022)