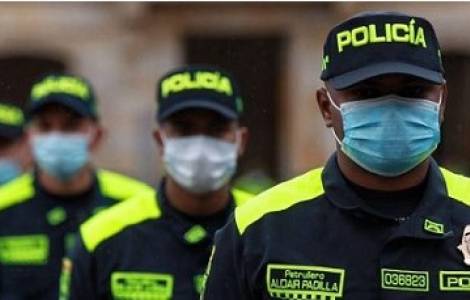 2022-10-03
Mining, with respect for Creation and human rights, builds progress and development not only economic

Bogota (Agenzia Fides) - "We express our most sincere condolences for the loss of many members of the National Police. We wish to extend this sentiment to all the relatives of the police officers who have fallen in the fulfillment of their duty": this is what the Presidency of the Colombian Bishops' Conference writes in a letter addressed to General Jorge Luis Vargas Valencia, Director General of the National Police of Colombia, with whom the Bishops adhere to the two days of prayer convened by the Military Ordinary, for July 28 and 30, in order to "pray the Lord for the National Police and for a country at peace and reconciled".
"We wish to renew our gratitude for the selfless dedication of all the members of the police who, in the different regions and territories of our dear Colombian nation, constitute an institutional presence", the Bishops wrote to General Vargas Valencia, reaffirming their solicitude as Pastors for all members of the the National Police institutions. After the last assassinations of members of the National Police, the Military Ordinary, Monsignor Víctor Manuel Ochoa Cadavid, underlined in a message: "Each fallen policeman is a brother, a son, a father, a Colombian. We cannot continue counting, we must on the contrary cry out to the sky for this situation to end. Never again the pain of the Fatherland!". Indeed, he explains, the death of each of our heroes will always be welcomed as the pain of the Fatherland: this is how we have experienced the murders committed against our police officers in recent days. Asking for prayers for the deceased police officers, the Military Ordinary "invites us to abandon the indifference that makes us look the other way". According to information gathered by Fides, in recent weeks members of the National Police have been the target of attacks and murders by the criminal gang of drug traffickers known as the "Gulf Clan", in response to the extradition to the United States of their leader, Dairo Antonio Úsuga, alias "Otoniel". The provisional toll speaks of more than 30 policemen killed and at least 25 attacks causing damage and injuries. The assassination of the Paraguayan prosecutor in charge of drug cases, Marcelo Daniel Pecci Albertini, on May 11, while he was on his honeymoon in Barú, a tourist island in Colombia, and was surprised by armed men on the private beach of his hotel, must also be included in this wave of violence. Pecci was known for his involvement in court cases related to money laundering and drug trafficking organizations. In Paraguay, he held the position of Prosecutor against organized crime, drug trafficking, money laundering and terrorist financing (see Fides, 12/5/2022). (SL) (Agenzia Fides, 28/7/2022)