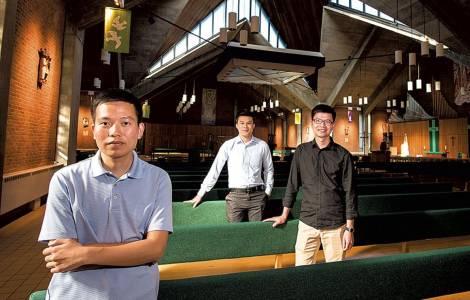 Hanoi (Agenzia Fides) - The formation of seminarians and priests and their missionary awareness are crucial for the life of the Church in Vietnam: according to information from Agenzia Fides, Fr. Anton Nguyen Van Thang, Vicar General of the Archdiocese of Hanoi, speaking at the pre-synodal assembly, organized by the Commission for Education of the Archdiocese of Hanoi, within the framework of the path of the Synod on Synodality, proclaimed by the Pope and ongoing in the Church Universal Catholic.
"It is necessary to renew the process of formation of priests, implementing the guidelines of the Church according to the local reality, to form Pastors full of nobility of spirit, dedicated to the ministry of communion and missionary spirit, who reflect the image of Jesus Christ in their lives", said Father Van Thang. "Apart from basic factors such as the environment and the family - he continued - it is necessary that every young candidate for the priesthood has guidance in his search for a priestly vocation. The human formation of each candidate is essential and must be taken care of from the beginning, always having the conscience of Jesus as a reference". In the path of formation of the personality, he added, it is necessary to shape psychologically balanced, honest, upright, emotionally mature candidates, with good human relationships with others and with a solid spiritual and prayer life. In the major Seminary - it was underlined in the assembly - it is the task of the formators to accompany the seminarians so that they may grow intellectually, humanly and spiritually. To do this, seminarians must also be open, eager to learn and willing to collaborate with those in charge and guide them on the path of growth and study, the Vicar General pointed out. Regarding the missionary ministry of priests, the Hanoin pre-synodal assembly highlighted the importance of parish priests accompanying and sharing missionary experiences with seminarians. From his own pastoral experience in the parish where he serves, Father Paul Nguyen Huu Hiep, parish priest of Muong Cat, wanted to point out that "Jesus entrusted us with the task of carrying out the mission of announcing the Gospel", so it is important that every priest has a solid and deep missionary conscience. The Archbishop of Hanoi, Joseph Vu Van Thien, for his part, underlined in conclusion: "The work of formation of priests is very important in the Church, because it is its future. It is the common responsibility of all the members of the People of God". As part of the preparation for the Synod on synodality, the Church in Vietnam has also taken up and reflected on the well-known historical documents "Monita ad Missionarios" ("Instructions for missionaries") written almost four centuries ago by the Apostolic Vicars François Pallu and Pierre Lambert de la Motte, founders of the Society of Foreign Missions of Paris (1663). Sent to Asia at the request of the Holy See, the two priests wrote the Monitas in Ayutthaya, in the Kingdom of Siam, in 1665, bringing together a set of rules of conduct for missionaries, inspired by Sacred Scripture, the constitutions of the Supreme Pontiffs, the doctrine of the Fathers of the Church and the examples of the saints. Today, the Vietnamese Church collects these instructions as a treasure from the past that illuminates the present: at the recent meeting of the Major Seminaries of Vietnam, organized in Da Lat in recent days, the central theme was: "The path of evangelization and construction of the Church of Vietnam according to the idea of Bishop Pierre Lambert de la Motte". Father Dominic Pham Van Cau, executive director of the Sacred Heart Seminary in Thai Binh, recalled that "by conforming to Christ, as the Monitas suggest, the priest is called to live the Gospel: it is important for seminarians to learn to give themselves to God and to the neighbour". (AD/PA) (Agenzia Fides, 27/7/2022)