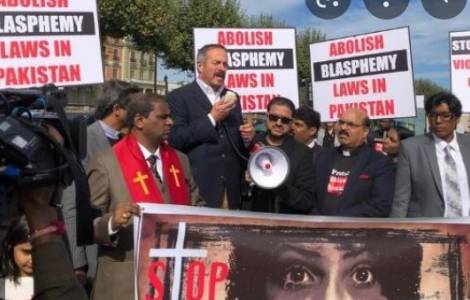 Lahore (Agenzia Fides) - The Lahore court sentenced to death a Christian accused of blasphemy in 2017. On July 4, 2022, at Lahore in the province of Punjab, Session Court sentenced to death by hanging Ashfaq Masih, now 34 years old. Ashfaq Masih, a mechanic by profession, has been in prison since June 2017 after a complaint (First Information Report) was filed against him on June 15, pursuant to art. 295 "c" of the Pakistani Penal Code, which punishes the contempt against the Prophet Mohammed. Ashfaq Masih, married and father of an 8-year-old daughter, claims that he did not defame or utter contemptuous words against the Prophet Muhammad. In his statement Ashfaq Masih said: "I am innocent, the case against me is baseless, false, and frivolous and framed against me just to destroy my business. My business was running well, and I was very happy but Muhammad Naveed, who is also a motorcycle mechanic and had started a shop in front of me, was jealous because my business was doing well and had a good reputation in the area. We had already fought a few days before the incident".
On June 15, I had an argument with Muhammad Irfan who refused to pay me 40 Pakistani rupees after getting his bicycle repaired, claiming that he was a Sufi believer, therefore he did not have to pay". Ashfaq Masih continued: "I do not follow anyone other than Jesus and asked to be paid. Instead of paying for the work done, Muhammad Irfan together with Muhammad Naveed turned the matter into a religious one and accused me of blasphemy". According to the accused, Muhammad Naveed and Muhammad Ashfaq organized a conspiracy against him, as his mechanic's shop was doing well. Ashfaq Masih reports: "I was also threatened by these two men because they wanted me to leave the mechanic's shop. I also provided the same information to the police officer who arrested me. I never uttered derogatory words against the Prophet Mohammed and I would never do such a thing. I respect the Prophet Mohammed with all my heart and soul", concludes Ashfaq Masih.
Joseph Jansen, president of the NGO "Voice for Justice", who follows the case, speaking to Fides, said: "Ashfaq Masih’s death sentence creates disappointment and fear for the entire Christian community in Pakistan, and in particular for all other detainees accused of blasphemy and for their families. Jansen observes: "Many of the cases of blasphemy complaints are based on false accusations, and use the accusation to settle personal disputes. It is saddening to see that such accusations, trampling on the rule of law, lead to mob violence against the accused, who cannot defend themselves". Joseph Jansen further states: "Christians in Pakistan are deeply wounded as Ashfaq Masih, falsely accused, is sentenced to death. It is clear that all the evidence in this case is fabricated and Ashfaq Masih is trapped in it only for having claimed the service costs for the repair of a Muslim's motorcycle". The NGO "Voice for Justice" is demanding justice for Ashfaq Masih and his immediate release, urging the Court to punish those who incite or commit violence on the basis of false accusations of blasphemy.
Ashiknaz Khokhar, activist for minority rights in Punjab, tells Fides: "It is disturbing to see that the courts of first instance hand down death sentences to those accused of blasphemy, even without sufficient evidence. There are threats and pressure from extremist groups on the courts, but it is now very clear that most cases of blasphemy are based on false accusations, linked to personal disputes. The government must take serious measures to end the abuse of blasphemy laws and work to protect the fundamental rights of citizens and their families". According to data from the "Center for Social Justice", between 1987 and 2021, 1,949 cases of people accused of blasphemy were registered in Pakistan, including 928 Muslims, 643 Ahmadis, 281 Christians, 42 Hindus and 55 of unknown faith. Of these, 84 people were killed out of court before a final verdict was reached. (AG/PA) (Agenzia Fides, 26/7/2022)