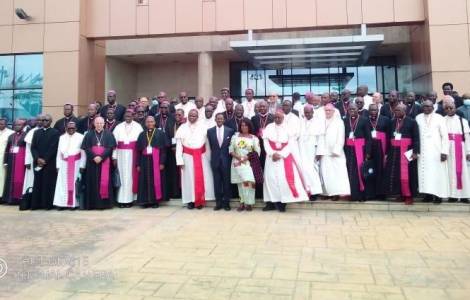 2022-09-03
The path of national reconciliation, led by religious leaders, awaiting the last step

2022-07-20
Archbishop Rugambwa to Bishops of Central Africa: "Bishops should be the mouthpiece and defenders of youth in governments and societies"

Mongomo (Agenzia Fides) - "The Episcopate of Central Africa should be the mouthpiece and tireless defender of youth in their respective governments and societies, drawing attention to the reality of the migratory phenomenon, which sees young people at the forefront, especially as victims". This is the invitation launched by Archbishop Protase Rugambwa, who spoke on behalf of the Section for the First Evangelization and the new Particular Churches of the Dicastery for Evangelization, to the Plenary Assembly of ACERAC (Association of the Regional Episcopal Conferences of Central Africa).
ACERAC, founded in 1989, brings together the Bishops of Cameroon, Chad, Gabon, Equatorial Guinea, Central African Republic and Congo.
The 2022 Annual Assembly, to be held in Mongomo (Equatorial Guinea) from July 17 to 24, will address the central theme: "The Phenomenon of the Youth Migration: The case of Central Africa", a theme considered "essential and current" by the Archbishop, which follows the topics discussed in the last Synod of Bishops on young people, in the years 2018-2019, which were also taken up in Pope Francis' Apostolic Exhortation "Christus Vivit". Faced with the phenomenon of migration, Archbishop Rugambwa underlined, it is necessary "to help the youth of Central Africa not to waste, but rather to shape an identity that values their origins, their culture and their religiosity in the encounter with new cultural and religious schemes and models. The whole Church, starting with us Pastors, must commit itself to dealing with this migratory phenomenon, evaluating its positive and negative elements". In his speech, Monsignor Rugambwa expressed his appreciation for the good collaboration that binds the Dicastery for Evangelization, in particular its Section for the First Evangelization and new Particular Churches, and the six Episcopal Conferences of the Central African Region, in the evangelizing mission of the Universal Church. This path must be continued according to the synodal impulse called for by the Holy Father in order "to work together, amid this phase of changes (reforms), both in the Church and in society".
In this context, the Archbishop also pointed out the priority of ensuring an adequate formation of pastoral workers, since "all the baptized must be prepared to become missionary disciples, including the young people of today and tomorrow". Young people in particular "are a valuable force for missionary activities and for the growth of the Church", therefore their adequate formation remains a priority for effective evangelization ad intra and ad extra, that is, in the Church as well as in Society. This formation is ensured through the Pontifical Mission Societies, especially through the Holy Childhood, as well as the Associations and Ecclesial Movements, educational centers and institutes.
As the Holy Father says in the Letter "Christus Vivit" (n. 144), while drawn towards the future and its promise, young people also have a powerful desire to experience the present moment. "We have the task of indulging this desire, and accompanying it carefully - underlined the Archbishop -. Indeed, we make use of the aforementioned ecclesial institutions, always trying to promote and support activities that involve young people. Moreover, we always focus on the commitment of families, Pastors, consecrated persons, all the faithful adults".
Archbishop Rugambwa concluded his speech by wishing the Assembly a fruitful process and imploring "the guidance of the Holy Spirit for a renewed missionary spirit of the young people of the Central African Region". (SL) (Agenzia Fides, 20/7/2022)