AFRICA/DR CONGO - The ordination of the Bishop of Matadi: "May the Lord help you to effectively sow his love in hearts" 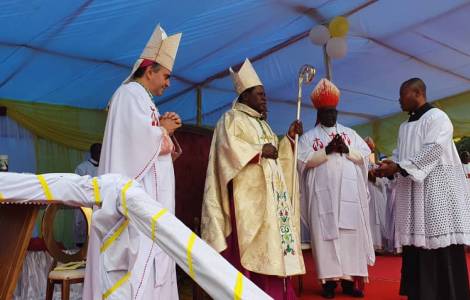 Matadi (Agenzia Fides) - "What is expected of a bishop is to show great concern for the Lord's flock, to the point of not even hesitating to give his life for those whom God has entrusted to him. He is expected to be ... a good pastor, who nourishes the people with the proclamation of the Word of God, who preaches at an opportune and inappropriate time, and with the celebration of the holy sacraments, especially the Holy Mass, which is the culmination and source of all worship and of the entire Christian life". With these words, Cardinal Fridolin Ambongo, Archbishop of Kinshasa, exhorted Monsignor André Giraud Pindi Mwanza Mayala, the new Bishop of Matadi, on Saturday, July 16, during his episcopal ordination mass. The celebration took place in the Redjaf military camp, in the city of Matadi, in the province of Kongo Central (Democratic Republic of Western Congo).
Before a large assembly made up of faithful from the diocese of Matadi, priests, men and women religious from Matadi and neighboring dioceses, and the bishops of the Ecclesiastical Province of Kinshasa, Monsignor André Giraud Pindi has been ordained bishop by Cardinal Fridolin Ambongo, assisted by Monsignor Ettore Balestrero, Apostolic Nuncio in the Democratic Republic of the Congo, and Monsignor Dominique Bulamatari, Bishop of Molegbe. In his homily, Cardinal Ambongo, who presided over the celebration, invited the new bishop to also be an architect of love: "Dearest brother of ours, Monsignor André Giraud, chosen by God to be appointed Pastor of Matadi, you have given yourself as episcopal motto 'infunde amorem cordibusì' (infuse love in the hearts). This is the task that the Lord entrusts to you in his vineyard here in Matadi. May the Lord himself help you to effectively sow his love in the hearts of the sons and daughters of the Church, the family of God, who live in the diocese of Matadi".
Among the civil authorities present was the governor of the province of Kongo Central, Dr. Guy Bandu. In his speech, he told the new Bishop: "It is an honor for me to take the floor today to express my gratitude. His episcopal appointment begins a month after he received my notice of appointment as governor. This is not a coincidence. I assure you of my accompaniment and I await your prayers to assume my heavy responsibilities".
Monsignor André Giraud was born on July 24, 1964 in Kindomingielo, Diocese of Matadi, and was ordained a priest on September 18, 1994 (see Fides, 27/4/2022). The Holy Father appointed him Bishop of Matadi on April 23, 2022. He thus became the 8th Bishop of this diocese erected in 1911, which today has about fifty parishes with almost 200 priests. (P.P.M.) (Agenzia Fides, 19/7/2022)