ASIA/MALAYSIA - Acts of vandalism in a Catholic cathedral in Borneo, the Bishop does not file a complaint 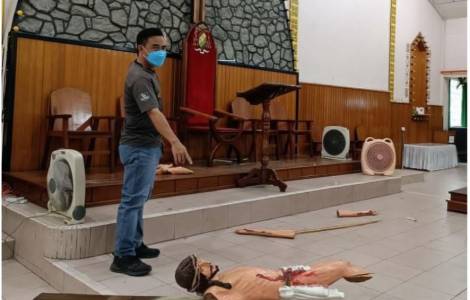 Keningau (Agenzia Fides) - A man vandalized a cross, a statue of the Virgin Mary and parts of the Sacred Heart of Jesus at St. Francis Xavier Cathedral in Keningau diocese, in Sabah state, around 7:30 a.m. on July 7, after the morning mass. The parish administrator Nancy Nelly Jones informs that the person in charge is a 34-year-old man who "is said to be mentally ill". The man's mother, the note reports, went to the church and said the culprit was her son and the police detained the man and are dealing with the case.
"The parishioners are sad and shocked by this incident; we just want to repair what was damaged and move on", they say, ensuring that "the broken crucifix and other damaged icons will be repaired". "The police are conducting further investigations in relation to this event and we await more information", said the Bishop of Keningau, Msgr. Cornelius Piong, informing that, given the circumstances, the Church is thinking of not filing a complaint. "We need to forgive, we need to pray for the perpetrator, especially because we know he is not in a normal condition. Let us forgive and pray for our brother. The Church will not ask for compensation from the family", Bishop Cornelius said, saying he greatly appreciated the mother’s, sincerity. Msgr. Cornelius said: "This sad episode offers us the opportunity to assume a compassionate attitude. As a Church on a synodal journey, we must walk together in community, care and a spirit of responsibility in our mission to proclaim the Gospel", said Msgr. Piong.
The diocese of Keningau is located in the north of the island of Borneo, in the Malaysian state of Sabah. It is the oldest and largest region in the interior of Sabah, with 43 sub-districts and 245 villages. Almost 90% of Keningau's population is of Dusuns and Muruts ethnicity, 8% are Chinese and other local indigenous people. Catholics are about 135 thousand out of a population of 486 thousand inhabitants.
In Malaysia, Islam is the official religion but the Constitution guarantees freedom of worship to other faiths present, such as Christianity, Buddhism, Taoism, Hinduism and animism. (SD/PA) (Agenzia Fides, 9/7/2022)