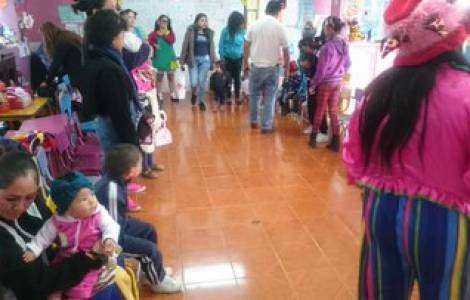 2022-10-19
"We have taken the first step, Ecuador needs us to continue walking together": dialogue tables concluded

2022-09-08
The point on dialogue envisaged by the peace agreements: "it is the only way to resolve the great conflicts and the historical demands of all"

2022-07-19
The dialogue tables start, the Episcopal Conference guarantor of the process

Quito (Agenzia Fides) - On June 13 a national indigenous strike began in Ecuador which blocked all the roads in the country. Thousands of indigenous people arrived in Quito, which became the center of all protest actions. There were many acts of violence, looting, tire fires and within a few hours the inhabitants of the capital found themselves completely imprisoned and besieged (see Fides, 22/6/2022; 24/6/2022; 1/7/2022). Poverty data were delivered and 10 points were set for negotiations with the government. For 18 days, until the peace agreement, no one was able to circulate calmly in the various cities. Products began to run out and, when they were available, the prices were sky high. Few could pay them and here began the ordeal for many victims that few or no one wants to talk about.
Amparito Medina, Coordinator of an assistance project for pregnant mothers living in situations of extreme vulnerability, "Proyeto SOS Mamà" of the Archdiocese of Quito, retraces the events of the last few weeks for Fides, highlighting a little known reality. A high percentage of the beneficiaries of the Project spend their days on the street, are street vendors or do informal jobs in order to literally survive. In this situation, a day when they cannot sell their products or go to work means not being able to eat, not being able to buy diapers, not being able to charge their mobile phone and not even being able to take a bus.
For us who are dedicated to the Project, she continues, this situation meant receiving their desperate calls for help: they no longer had the gas to cook and live in rooms where they cannot even cook with wood, they did not even have a kilo of rice or a tomato, vegetables to feed their children ... We tried to reach their neighborhoods with help for a week, but it was impossible, the crowd in the street threatened to smash our car with stones. We explained that we were carrying humanitarian aid and we almost suffered an assault, we had to give them part of the aid to be able to pass. Finally, with the help of the priests and taking advantage of a space of respite, we managed to reach the mothers in the morning, with great effort, to the parishes near their homes, where they were able to receive what we were able to collect from donations. If our benefactors cannot produce, they cannot sell, and if they have no income, they cannot even help us, and in such a situation the Project would not be able to survive. "This is the reality of the other victims of this national strike, concludes Amparito - victims for whom, without the help of the Catholic Church, daily life is very difficult. They just want to work, live in a society without violence and educate their children without rancor or hatred among their brothers". (SL) (Agenzia Fides, 6/7/2022)