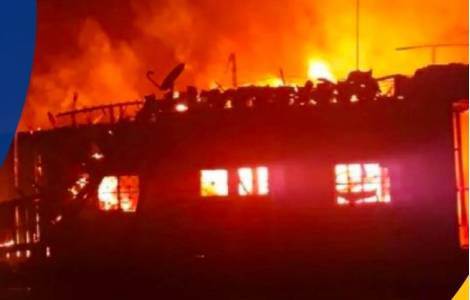 Bogota (Agenzia Fides) - In the early hours of Tuesday, June 28, a fire caused by inmates in the security prison of Tuluá, in the department of Valle del Cauca, in southwestern Colombia, caused at least 51 deaths and 24 wounded, according to Justice Minister Wilson Ruiz. Of the 24 injured, six are admitted to the Tuluá intensive care unit. According to the INPEC (National Penitentiary and Prison Institute) the Tuluá prison houses 1,267 inmates. There were 180 in the pavilion where the events took place. General Tito Castellanos, director of INPEC, explained that it all started with a dispute between the prisoners who, when members of INPEC intervened to control the situation, began to set their mattresses on fire, causing a domino effect, so that the flames quickly spread throughout the pavilion. In a statement, the bishops, "on behalf of the Catholics of Colombia, deplore the loss of these human lives in such painful circumstances and express to their families their closeness at this time that unites two tragedies; the first, the reality of having a family member deprived of his liberty and the second, the impossibility of seeing him at home again and of him being able to reintegrate into society".
In the message of the Colombian Episcopal Conference, sent to Fides, they express the conviction, based on faith in Jesus Christ, of the possibility of rehabilitation of any person, no matter how serious the crime committed. For this reason, they invite the country's prison authorities "to watch over and accompany and promote the life and social reintegration of those who are deprived of liberty." Finally, they invoke the intercession of Our Lady of Las Mercedes to protect prisoners and make fruitful the missionary work carried out by chaplains, religious and lay faithful "who announce the merciful love of God our Father in prisons." The bishop of the diocese of Buga, Monsignor José Roberto Ospina Leongómez, also expressed his closeness and solidarity in a video message.
"With a broken heart for the prison tragedy, I want to join all the families, especially those who have lost their loved ones. This tragedy is a mourning for the entire Colombian society, but above all for us here in the Valley". The Bishop asked for prayers for the eternal rest of those who died and for the Lord to comfort their families. He also invited solidarity by asking for concrete help in the form of medical supplies and basic necessities for the prisoners. (SL) (Agenzia Fides, 30/6/2022)