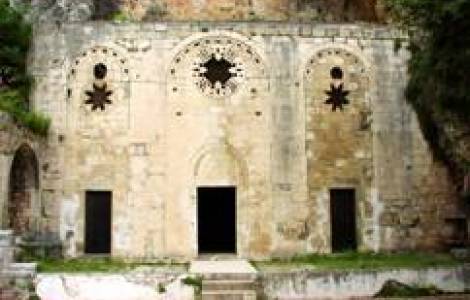 2022-02-28
Ukrainian President Zelensky telephones Patriarch Bartholomew: "We feel the support of your prayers"

2022-02-10
The ancient Monastery of Sumela used as a disco for an electronic music video. The government opens an investigation

Antakya (Agenzia Fides) - Also this year, baptized Catholics and Orthodox are preparing to experience intense moments of communion on June, 28 and 29, in the context of the liturgical memory of the Holy Apostles Peter and Paul in the city of Antakya - the ancient Antioch on the Orontes, currently in Turkish territory.
The center of the shared celebrations will once again be the so-called "Peter's Grotto" (in the photo), the ancient rock church on Mount Silpius, which reopened in 2015 after many years of restoration.
Capuchin father Domenico Bertogli, Catholic parish priest of Antakya, anticipates the salient moments of the upcoming celebrations to Fides, an opportunity for Christians of different confessions to walk together, with renewed faith, following the example of the two Holy Apostles.
The celebrations open on Tuesday, June 28, at 6 pm, with the Eucharistic liturgy scheduled in the Orthodox church of Antakya.
On Wednesday, June 29, at 10 am, in the garden of the Grotto of St. Peter, the ecumenical celebrations will begin in the presence of Archbishop Marek Solczyński, Apostolic Nuncio to Turkey, Bishop Paolo Bizzeti, Apostolic Vicar of Anatolia, and o Bishop Kostantin, envoy of Yohanna X Greek Orthodox Patriarch of Antioch. The celebrations will open with the performance of the Turkish national anthem, and will continue with readings in Turkish and Arabic of passages from the Gospels and the Acts of the Apostles, together with brief reflections by Archbishop Solczyński, Bishop Bizzeti and Orthodox Bishop Kostantin, all punctuated with prayers and songs from the various communities. The celebration also includes the common prayer of the Our Father and the Hail Mary in Turkish, the recitation of a prayer for peace, the blessing given by the bishops present and the blessing of the blessed Loaves, with the final song sung by the Orthodox. After the ceremony, Catholics and Orthodox will share lunch in a restaurant. In the afternoon, the Catholic community will gather in the courtyard of the Catholic Church of Antioch for the solemn Eucharistic concelebration.
The ancient rock church of St. Peter still retains the physiognomy that the Crusaders gave it, who conquered the ancient Antioch on the Orontes in 1098. But the Byzantines had already transformed the place where the first baptized people met during the periods of persecution into a chapel, in the city where for the first time the disciples of Jesus were called Christians and where St. Peter was Bishop, before coming to Rome.
The restoration completed in 2015 put an end to the state of abandonment in which St. Peter's Grotto found itself. In past years, Patriarchs and Bishops were often present at the celebrations that took place there on the solemnity of Saints Peter and Paul. (GV) (Agenzia Fides, 28/6/2022)