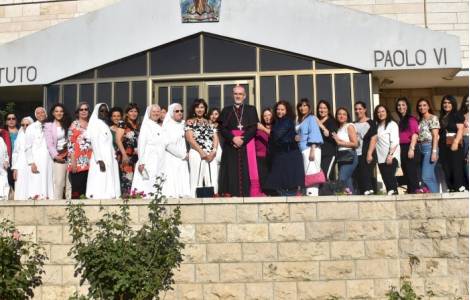 Bethlehem (Agenzia Fides) - Effetà (or Effatà) in the Aramaic language means "open". It is the word used by Jesus to effect the healing of the deaf-mute, reported in the Gospel according to Mark: «They brought him a deaf-mute and asked him to put his hand on him. He took him to one side, away from the crowd, he put his fingers in his ears and with the saliva he touched his tongue; "then looking at the sky, he let out a sigh and said: "Effatà", that is, "Open up!" And immediately his ears were opened, he untied the knot of his tongue and spoke correctly». For more than 50 years, "Effetà" is also the name of the Institute inaugurated in 1971 in Bethlehem, the city where Jesus was born, to assist deaf and dumb children in Palestine. The Institute has just celebrated its Golden Jubilee, after the restrictions due to the pandemic in 2021 prevented it from properly celebrating the first fifty years of activity. And the anniversary offers an opportunity to renew gratitude for the daily miracle of a Christian charity that has spent more than fifty years alleviating the real problems and hardships of the people of Palestine, and helps to remember the great care with which Pope St. Paul VI, after his trip to the Holy Land in 1964, concretely supported the creation of stable and permanent works in favor of the poor and afflicted who live today in the land of Jesus.
The foundation of the Effetà Institute has its roots in the pilgrimage trip that Pope Montini made to the Holy Land in January 1964. During that trip, among other things, the Lombard Pontiff realized that there were many deaf and dumb children in Palestine that they did not receive the help they needed, and expressed the wish that a work specifically dedicated to assisting these little ones be launched. To fulfill the wish of Paul VI - reports the story of those beginnings, repeated by the media of the Latin Patriarchate of Jerusalem - Sister Irma Zorzanello, at that time Superior General of the Congregation of the Teacher Sisters of Saint Dorothea Daughters of the Sacred Hearts (in the Holy Land since 1927), "wrote to Pope Paul VI to offer him land owned by the Congregation with a building then under construction at the beginning of what is now Paul VI Street in Bethlehem". The Pope accepted the offer, but returned the property to the Congregation and asked them to take care of the re-education of Palestinian children with hearing problems", by building a school on the land with adequate and modern scientific equipment. The necessary funding was obtained through collaboration with the Pontifical Mission for Palestine. More than six years later, on June 30, 1971, the Paul VI Institute was inaugurated by Cardinal Maximilien de Fürstenberg, who soon after became Grand Master of the Order of the Holy Sepulchre. School activities began on September 6, 1971 with 25 deaf Palestinian students, six of whom came from Jordan. Currently, the institute welcomes about 180 children, from kindergarten to high school, and offers each of them a complete educational program, which includes audio and acoustic rehabilitation and individual support. On Tuesday, June 7, on the occasion of the official celebrations for the first 50 years of activity of the praiseworthy work of mercy, Archbishop Pierbattista Pizzaballa, Latin Patriarch of Jerusalem, presided over a Eucharistic celebration at the institute, followed by a reception during which the history of the institution was also retraced.
On November 14, 2011, Pope Benedict XVI elevated the Effeta Institute to "Pontifical Institute Effeta Paul VI" by motu proprio. The Effetà Institute represents another surprising manifestation of the apostolic concern shown by the Popes - in particular by Pius XII and Saint Paul VI - towards the suffering of the Palestinian people. Instead of limiting themselves to vague declarations of solidarity or gestures of abstract symbolic meaning calibrated to gain media visibility, the two aforementioned Successors of Peter preferred to support the establishment of stable and permanent institutions in support of the daily needs of the Palestinian people. The "Pontifical Mission" in the Holy Land, an organization founded in 1949 at the request of Pope Pius XII with the primary intention of helping Palestinian refugees after the creation of the State of Israel, and the University of Bethlehem, an academic institution run by the Brothers of the Christian Schools and relaunched as the Athenaeum in the 1970s also at the request of Pope Paul VI as an instrument for the formation of young Palestinians in the city where Jesus was born, respond to these characteristics of concrete action. (GV) (Agenzia Fides, 9/6/2022)

AFRICA/EGYPT - Luxor hospital asks Egyptian Christians to give their 'tithe'