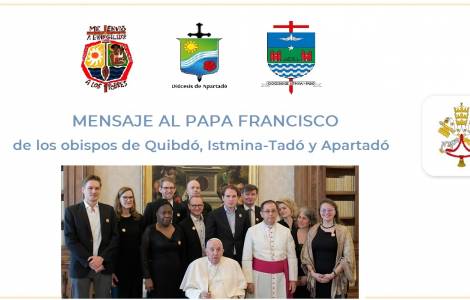 2022-07-06
After the murder of three Awá indigenous people, the Bishop of Tumaco asks for investigations and protection

2022-06-30
Fire in the Tuluá prison: the authorities called to "watch over and accompany the life and social reintegration of detainees"

2022-06-21
Archbishop Rueda Aparicio: "it is important that we look at the present and the future of Colombia"

2022-06-14
"A Church moving forward in the Amazon, overcoming fears and apprehensions": visit to the Vicariate of Puerto Leguízamo-Solano

Vatican City (Agenzia Fides) - On Saturday, June 4, the Bishop of Quibdó, Monsignor Juan Carlos Barreto, during a meeting with Pope Francis at the Vatican, presented to the Pope the humanitarian crisis and the human rights situation in these territories, asking for his intervention. The meeting with the Holy Father took place on the occasion of the audience granted to the members of the "Casa hogar Deutschland e.V", who carry out a work of assistance to girls and women in the conflict regions of Chocó, in western Colombia, supporting some humanitarian projects in the area.
In a letter that was read to the Pope by Monsignor Barreto, also signed by Bishops Mario de Jesús Álvarez Gómez, from Istmina-Tadó and Hugo Alberto Torres Marín, from Apartadó, the "beauty and richness" of these territories are highlighted, the richness of biodiversity recognized worldwide, the forest that covers a large part of the territory and constitutes a "reserve of water and oxygen for humanity". The population is 80% Afro-descendant, 14% indigenous, and 6% mestizo. Spirituality is strongly influenced by the figure of Saint Francis, to whom the cathedral and several other churches are dedicated, one more reason for affection towards Pope Francis who has chosen the name of the saint of Assisi as pontiff. Quibdò, capital of Chocó, had been indicated by the Episcopal Conference as a possible stop on the Pope's trip to Colombia in 2017. "In the midst of so many values, the people of Chocó are experiencing a dramatic humanitarian and human rights crisis," the letter continues, pointing out that 64% of its inhabitants live in poverty, which has its origin in "the abandonment of the State, the perverse actions of the armed groups, the weak implementation of the Peace Agreement and the interests of various economic groups. The Colombian Pacific, like other regions of the country, has become a theater of war and anarchy that destroys the lives of people and communities".
Humanitarian missions carried out by the Church, civil society and representatives of the international community have highlighted the humanitarian, environmental, economic and social crisis facing communities, manifested in forced displacement, deaths and mutilations by anti-personnel mines, child recruitment, threats to leaders and communities, murders, extortion and other crimes. Violence in the city of Quibdó has caused more than a thousand deaths among young people in the last ten years, and the high number of suicides among young people, especially in indigenous communities, reflects the desperation and terror that exists in the region. "Beloved Pope Francis, Chocó is in need of decent living conditions and loudly cries out for your apostolic intervention - the letter concludes - to achieve two fundamental objectives: a humanitarian agreement and a negotiated solution to the armed conflict. Otherwise, the suffering of the people will increase and many more victims will be claimed. Holy Father, the department of Chocó loves you and longs for your voice of hope and a blessing that will be the balm and strength to continue the difficult path". (SL) (Agenzia Fides, 6/6/2022)