ASIA/MONGOLIA - The Apostolic Prefect Marengo, appointed Cardinal: "That of the Pope is a missionary gesture" 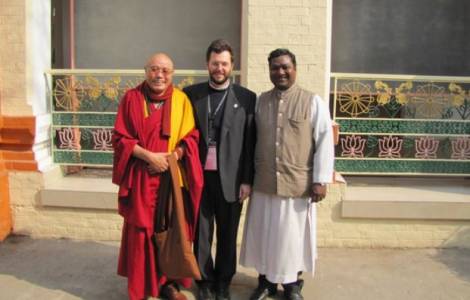 2022-07-01
Msgr. Marengo: "Accompany the faithful on their journey with the light of the Gospel"

2022-05-30
The Apostolic Prefect Marengo, appointed Cardinal: "That of the Pope is a missionary gesture"

2021-10-20
The Apostolic Prefect: mission is nourished with the depth of faith

2020-04-02
Appointment of the Apostolic Prefect of Ulaanbaatar

Rome (Agenzia Fides) - "I am surprised and amazed by an unexpected moment of grace. I believe that the Pope's gesture was a missionary gesture, to express attention and care to a small community and to all the small communities of faithful scattered throughout the world, in those lands where they are a small flock. I welcome this appointment with confidence in God, who will show me the way, and in the Pope. I hand it over to the Virgin Mary, since I am a Consolata Missionary, so that she can always intercede and guide me on my journey". Thus confides to Agenzia Fides Father Giorgio Marengo, Apostolic Prefect of Ulaanbaatar, in Mongolia, appointed Cardinal by Pope Francis, as announced in the Regina Coeli yesterday, May 29, in St. Peter's Square. Msgr. Marengo, 47, is the youngest member of the College of Cardinals. The Apostolic Prefect was in Rome to attend the meeting, which he himself organized and held on May 28, between a delegation of Buddhist leaders from Mongolia and the Pope. "It was a meeting that we have tried to organize in recent years, thanks to contacts with the Pontifical Council for Interreligious Dialogue and, after the difficulties due to the pandemic, we have now been able to complete. Dialogue with the Buddhist world, which is a majority in Mongolia, is fundamental for us, it is part of our mission. I am sure it will bear good fruit".
Msgr. Marengo, during his stay in Italy, received the surprise of his appointment. On his mission in the future he notes: "I believe and hope that good relations can also be consolidated with the civil authorities, who are attentive to the universal Catholic Church. The Pope's gesture will certainly be considered as a positive sign of attention towards the country. In addition in 2022 we celebrate the 30th anniversary of the rebirth of the Church in Mongolia and the establishment of diplomatic relations between Mongolia and the Holy See". Recalling the situation of the mission of the Church in Mongolia, the Prefect remarked: "For the 30 years of missionary life, we have organized a Pastoral Week at the end of June, a meeting in which, on the path of synodality, we will reflect on the future prospects of our Church, which today has 2 Mongol priests, 22 foreign missionaries and about 35 missionary nuns. The direction of the journey is that of an ever more full and lively involvement of the baptized in the local Church. The criteria that we will follow are: depth, that is, to give formation and deepen the faith received; communion, that is, living every step and every choice with a spirit of fraternity, preserving unity, within the Catholic community and also in relations with the outside world; proclamation, or being a Church that goes forth, continuing in the evangelizing mission, giving the Gospel of Christ and whispering his message of love to every creature".
The new Cardinal also joyfully recalls the belonging of the Church in Mongolia to the newly formed Central Asian Bishops' Conference: "We are happy to be part of a journey of sharing with the other Bishops: it is a mutual enrichment and a reason for great comfort".
Father Giorgio Marengo, religious of the Consolata Missionaries, consecrated Bishop in August 2020. He arrived in Mongolia with his confreres, the Consolata Missionaries, in 2003 to pastorally accompany the small community of Arvaiheer, in the Uvurkhangai region. T
he Catholic Church in Mongolia has about 1,300 faithful out of a total of three and a half million inhabitants. There are eight parishes and about sixty missionaries of different nationalities and Congregations who meet regularly. (PA) (Agenzia Fides, 30/5/2022)