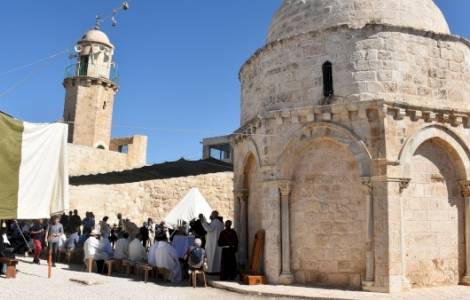 Jerusalem (Agenzia Fides) - It only happens in Jerusalem: it is there that one day a year, on the top of the Mount of Olives, Eucharistic liturgies are celebrated in the Roman rite even in a mosque. It happens on Thursday, on the day on which the Church of Rome celebrates the liturgical Solemnity of the Ascension of the Lord Jesus Christ. The sacred place where this tradition is repeated every year, yet another singularity experienced by Christians in the Holy Land, is the small Chapel of the Ascension, a building of Crusader origin which according to tradition contains the last trace of Christ, shortly before his ascension to Heaven. The place of worship was built as an octagonal chapel in 1152, and in 1198 it was transformed into a mosque by Sultan Salah al Din (Saladin), architect of the Islamic reconquest of Jerusalem. Today, the chapel is still part of the so-called Mosque of the Ascension of Jesus, whom Muslims recognize and celebrate as the Prophet ʿĪsā.
The ancient Christian place of worship is open to visitors and pilgrims throughout the year, and on the Feast of the Ascension, by special concession of ancient tradition, the Franciscans of the Custody of the Holy Land celebrate Eucharistic liturgies there, attended by groups of native Christians and pilgrims. This year, on Thursday 26 May - the official media of the Latin Patriarchate of Jerusalem reported - a mass in Arabic was celebrated at 8 am in front of the shrine of the chapel of the Ascension, and another Eucharistic liturgy in Latin at 9.30 am. On a very hot day, after the liturgy, those present gathered inside the chapel to contemplate the place from which, according to local tradition, Jesus ascended to the Father. The Feast of the Ascension celebrates the event - reported in the Gospels and in the Acts of the Apostles in which the Risen Jesus bids farewell to his disciples and ascends to Heaven.
"So then the Lord Jesus, after he spoke to them, was taken up into heaven and took his seat at the right hand of God.But they went forth and preached everywhere, while the Lord worked with them and confirmed the word through accompanying signs" (Mk 16: 19-20).
The Gospel of Luke reports that the Ascension of the Lord took place outside Jerusalem, along the route "to Bethany", a village situated on the Mount of Olives. The Byzantine tradition - as the contributions of Bishop Manuel Nin, Apostolic Exarch of Greece also reveal - in the liturgical texts of the Solemnity of Christ's Ascension to the Father traces the great moments in the history of salvation, from the incarnation of the eternal Word of God, his birth, his passion and death, up to his resurrection and ascension, from where he sends, as his gift and from his Father, the Holy Spirit, whose work makes the mission of the Church possible. From the very first troparium on the eve of the feast, the Byzantine liturgy also recounts the astonishment of the angels at seeing a man ascending with his flesh to the right hand of the Father: "The Lord has ascended to heaven to send the Paraclete to the world. The heavens have prepared his throne, the clouds the chariot in which to ascend; Let the angels be amazed to see a man above them. The Father receives the one who from eternity dwells in his bosom". (GV) (Agenzia Fides, 27/5/2022)

EUROPE/RUSSIA - The Catholic community of Moscow: in the face of war, pray for peace, hope in God, touch the wounds of the suffering

AFRICA/EGYPT - Patriarch Tawadros II on the Feast of the Entry of the Holy Family: “A Blessing for the Country”