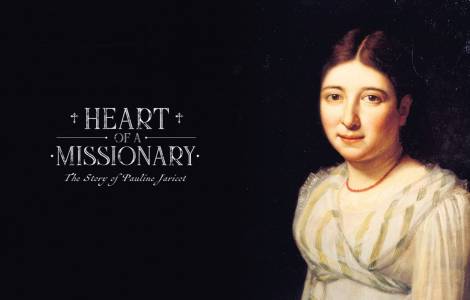 2022-09-24
In the USA for 75 years: Pontifical Institute for Foreign Mission looks back and thinks about the future

New York (Agenzia Fides) - On the occasion of the 200th anniversary of the Pontifical Society for the Propagation of the Faith (see Fides, May 3, 2022), the Pontifical Mission Societies of the United States have created and produced a documentary on the history and message of its foundress, the Venerable Pauline Marie Jaricot, who will be beatified in Lyon on May 22.
"Heart of a Missionary: The Story of Pauline Jaricot" is the title of the work in which interviews, testimonies, historical images and films about the foundress of the Pontifical Society for the Propagation of the Faith recount her human journey, her spirituality, her missionary charism and the fruits it has produced and continues to produce.
"Our world today needs witnesses who bear witness to Jesus Christ, to his merciful love and to his hope", declared Cardinal Luis Antonio Tagle, Prefect of the Congregation for the Evangelization of Peoples, in the documentary, "that was Pauline Jaricot's initial intention".
During the sixty minutes of the documentary, in which various scholars and historians take part, including Catherine Masson, who edited a very precise biography of Jaricot, her story is traced in France at the beginning of the 19th century, after the French Revolution. Pauline, also inspired by the example of her missionary brother, begins to gather small groups - mostly workers in her family's silk factory - asking each member of the group to offer daily prayer and the weekly sacrifice of a penny (the equivalent of one cent at the time) for the worldwide missionary work of the Church. From that intuition, the first of the four Pontifical Mission Societies, the POPF, was born, which had such an impact on the growth of the young Church in the United States. The documentary recounts, also through images from missions around the world, how POPF today reaches about 1,100 missionary dioceses in Asia, Africa, the Pacific Islands and remote areas of Latin America and Europe.
"The work of Pauline Jaricot is visible all over the world today", explains the National Director of the American PMS, Monsignor Kieran Harrington - There is no place that has not been touched by Pauline Jaricot".
In the documentary, in addition to Cardinal Tagle and Monsignor Harrington, those interviewed include Archbishop Giampietro Dal Toso, President of the PMS, Father Tadeusz Jan Nowak, OMI, Secretary General of POPF, Monsignor Philippe Curbelié, postulator of the cause of beatification of Pauline Jaricot , and some representatives of the local Churches of Tanzania and Uganda.
"Heart of a Missionary: The Story of Pauline Jaricot" will air this month on Catholic stations across the United States, including EWTN (Eternal Word Television Network), Catholic TV, DeSales Media Group's New Evangelization Television, and Catholic Telemedia Network of Brooklyn and Queens. Work is currently underway to release it on secular platforms as well. The documentary and its trailer are available on BlessedPauline.org, a website of the Pontifical Mission Societies of the United States dedicated to Pauline Jaricot. (EG) (Agenzia Fides, 7/5/2022)