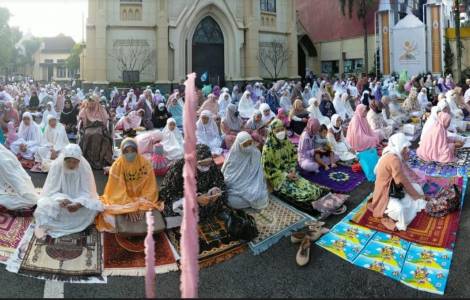 Jakarta (Agenzia Fides) - Christians in Indonesia expressed full and authentic solidarity to the Muslim faithful who celebrate the conclusion of the holy month of Ramadan on May 2. According to tradition, some logistical facilities (such as car parks and open spaces) have been made available in various churches in Indonesia for the Muslim worshipers who go to the mosque in the morning for the morning prayer of Eid-al Fitr, the last day of Ramadan. According to information from Fides, this happened in the Cathedral of Jakarta (which stands right in front of a large mosque), in the Church of the Sacred Heart of Malang, in the east of Java, where Christians shared good wishes and friendship with the Muslim faithful at the Great Jami Mosque.
In Malang, Muslim pilgrims gathered in the compound of the Catholic Church of the Sacred Heart, better known as the Kayutangan Catholic Church, about 300 meters from the mosque, where they received help from young Catholics who also distributed prayer rugs to all, as explained to Fides by Father Yoris, vice parish priest of the parish of the Sacred Heart of Jesus. "Every year we welcome our Muslim brothers and sisters: it is a way of living our tolerance and building religious harmony", he notes. "This attitude of communion and fraternity clearly shows the great tolerance of Indonesian Catholics towards the Muslim faithful, whom they consider brothers and fellow travelers". In many other places in Indonesia, such as the Nurul Iman mosque in Manggarai, in the eastern province of Nusa Tenggara, Catholics, especially young people, also contributed to the security service during the Eid prayers. Similarly, the Young Moluccan Protestant Church (AMGPM) in Ternate city, North Maluku, and local Catholic high school students distributed Eid prayer aids and publications to the Muslim assembly.
"These initiatives are part of our life to live with a multi-religious society and have become a tradition for each Eid al-Fitr, or Christian holidays such as Christmas or other religious celebrations: the goal is to build friendship and promote a sense of tolerance and brotherhood among religious believers in Indonesia", point out the local faithful. For the celebration of Eid in 2022, Indonesian Muslims performed their Eid morning prayer publicly, with deep feelings of joy and happiness in cities and towns, following a two-year ban imposed due to the pandemic. According to the authorities, at least 85 million people make a pilgrimage to celebrate Eid or have returned to their hometown. Indonesian President Joko Widodo joined in the Eid prayer at the "Gedung Agung" state building in Yogyakarta, extending the traditional 'Eid Mubarak' greeting to citizens. In a largely Muslim-majority nation, around 10% of Indonesia's more than 270 million people are Christian. Catholics are about eight million. (MH-SD) (Agenzia Fides, 2/5/2022)