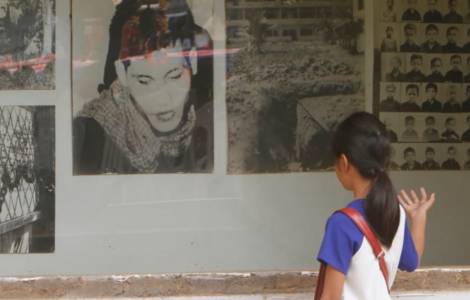 2022-04-30
Reconciliation and justice: towards the conclusion of the Khmer Rouge trial

Phnom Penh (Agenzia Fides) - Cambodia continues its path of healing and reconciliation, after the brutal reign of the Khmer Rouge which left deep wounds in the country. As noted by Sister Denise Coghlan, of the Sisters of Mercy, who moved to the Thailand-Cambodia border from her hometown of Brisbane in 1988 and has lived in Cambodia since 1990. The Australian missionary says: "In order to promote reconciliation, peace and justice, we had to be on both sides of the border and make friends with Cambodians from all warring factions", says the religious with regards to her commitment in the Jesuit Refugee Service (JRS), and the Mercy Refugee Service.
Part of the national healing and reconciliation process, to which so many religious communities and civil society associations have dedicated themselves, is the path of justice, which is underway through the trial of Khmer Rouge leaders. The trial is being conducted by an Extraordinary Chamber in the Courts of Cambodia (ECCC), established in 2003 and made up of local judges and United Nations legal experts. The court is reportedly due to complete its work later in 2022. On the day when the date for the final hearing is set, the long journey of the special tribunal for the Khmer Rouge established by Cambodian law in 2001 should finally come to an end. The court, criticized for its slow pace and its failure to bring justice to the many Cambodians who were killed and tortured at the hands of middlemen, was only able to convict five members of the then leadership, many of whom died before sentencing . Only Khieu Samphan, a senior Khmer Rouge leader and Cambodian leader from 1976 to 1979, remains in prison today. His case is also ongoing: On August 7, 2014, Khieu Samphan was initially sentenced to life imprisonment for crimes against humanity, with the sentence being upheld on appeal. In a second trial against him in 2018, he was also found guilty of the crime of genocide against the Vietnamese people. In August last year, at his last hearing, the 90-year-old leader, who was the only survivor, tried to convince the judges to change the verdict. A final ruling from the court is expected in the coming months. The Khmer Rouge regime seized power on April 17, 1975 and was overthrown on January 7, 1979. It is estimated that up to three million people died in this period of three years, eight months and 20 days. A civil war and invasion of Vietnam followed in 1978, which put the regime in its place and withdrew ten years later. In 1997, the government in Phnom Penh asked the United Nations for assistance in conducting a process to persecute senior Khmer Rouge leaders. In 2001, the Cambodian National Assembly passed legislation establishing a tribunal to try serious crimes committed under the Khmer Rouge regime. With the end of the process later this year and a darker page of Cambodian history will be closed. (EG/PA) (Agenzia Fides, 30/4/2022)