EUROPE/ITALY - A march for peace, relaunching the Pope's appeal: "Stop! War is madness" 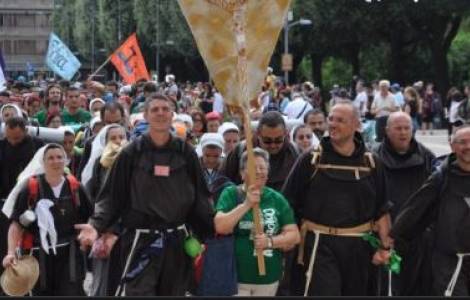 Assisi (Agenzia Fides) - "After almost two months of bombs, killings, suffering and devastation, alarmed by the serious social consequences of this new war, it is time to give space and voice to peace and to do so it is necessary to mobilize all women and men of good will". This was explained by the organizers of the "March Perugia-Assisi", a historic procession for peace that this year takes place on April 24th, outside the traditional calendar. The “extraordinary” choice, the promoters explain, is motivated by the desire to organize a procession in less than a month to relaunch Pope Francis' cry: “Stop! War is madness”.
The march intends to intervene in defense of Ukraine emphasizing the need to take the path of peace. Introducing the march in Assisi on April 13, Brother Marco Moroni, OFM Conv., Custos of the Sacred Convent of St. Francis of Assisi, said: "Coming together gives a sense of unity and we hope that this march will also serve to illuminate the diplomatic process", in a very difficult moment due to the absence of a glimmer of negotiation between the parties involved in the war in Ukraine.
According to the organizers, tens of thousands of people, associations and local authorities have taken up the appeal that Pope Francis made to everyone on Easter Sunday. The appeal is addressed to people of all faiths and cultural and political orientations who, next Sunday, April 24, will march together for peace in the 24 kilometers that separate Perugia from Assisi.
Among the organizers, Flavio Lotti, Coordinator of the promoting committee o Marcia Perugi-Assisi, and brother Marco Moroni explained that the focus is on the dramatic escalation of the war in Ukraine, but also on the need for "a strong intervention of the international community to stop the third world war in pieces that continues in Yemen, Libya, Syria, Palestine, Israel, the Sahel, Ethiopia, the Democratic Republic of the Congo, Afghanistan and other countries of the planet". The option is to march again and make the voice of peace heard on the path of non-violence and disarmament "in the footsteps of St. Francis - they say - of Aldo Capitini, Giorgio La Pira and Father Ernesto Balducci".
The first March took place on Sunday, September 24, 1961 at the initiative of Aldo Capitini and was organized as a non-violent procession to bear witness in favor of peace and solidarity among peoples. Since then, the March has been held on several occasions, always with a large number of participants.
The Perugia-Assisi Extraordinary March will take place on Sunday, April 24, starting at 9:00 a.m. from the Frontone Gardens in Perugia and arriving in Piazza St. Francis of Assisi at 2.30pm. Welcoming numerous Franciscan religious, nuns and lay people who launch an appeal for peace in the name of the Poor Man of Assisi, the procession will pass through Santa Maria degli Angeli and then towards Piazza St. Francis in the center of the city, dedicated to the saint. (EG/PA) (Agenzia Fides, 22/4/2022)