ASIA/KAZAKHSTAN - The President of Kazakhstan announces the visit of Pope Francis: for the Church it is a "sign of attention to the peripheries" 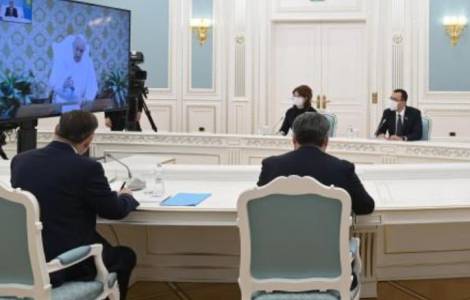 Nur-Sultan (Agenzia Fides) - "The news fills us with joy. We are grateful to the President of Kazakhstan for inviting Pope Francis and we really hope the visit can take place, 20 years after the visit of Pope John Paul II. The fact that the Pope comes among us is a great sign of attention to the Churches in the peripheries. We want to show him the beauty and vitality of the Catholic community in our country and in Central Asia": is what Mgr. José Luis Mumbiela Sierra, Bishop of the Holy Trinity in Almaty and President of the Episcopal Conference of Kazakhstan, said to Fides following a note from the Press Office of the President of the Republic of Kazakhstan, Kassym-Jomart Tokayev, announcing that - following a bilateral conversation, via videoconference, with the Holy Father - Pope Francis will visit Kazakhstan next September. "We are really happy to welcome the Pope among us. It would be a breath of hope and strength", comments Fr. Guido Trezzani, Director of Caritas Kazakhstan, to Fides. As the presidential statement points out, during the meeting, focused on strengthening cooperation between Kazakhstan and the Vatican and promoting interreligious dialogue, Pope Francis confirmed his willingness to participate in the VII Congress of Leaders of World and Traditional Religions, to be held in the Kazakh capital Nur-Sultan on September, 14 and 15, 2022. "I hope that this event will be significant to promote inter-religious dialogue, unity and rapprochement of States, which is extremely important these days. We see how diverse and united your country is. This is a basis for stability. We are happy that in Kazakhstan you understand this. You can count on my support, and I appreciate your efforts", said Pope Francis - as stated in the text of the statement - underlining the exceptional importance of maintaining the values of unity and harmony in the current geopolitical situation. Kassym-Jomart Tokayev – informs the note sent to Fides - confirmed, in turn, the firm commitment of Kazakhstan to the further development of cooperation with the Holy See in the field of interreligious dialogue and mutual respect, illustrating the Pope the Kazakh model of interreligious harmony and unity and counting the implementation of recent political and economic reforms.
The invitation to Kazakhstan was delivered to Pope Francis last November 6, during an audience with the President of the Senate of Kazakhstan, Maulen Ashimbayev, at the Vatican. On that occasion, the President of the Senate thanked the Holy See for the support to the initiative already shown in previous years. The First Congress of Traditional World and National Religions was convened by former President Nazarbayev in Astana (now Nur-Sultan) on September, 23 and 24, 2003. On that occasion, delegates sent from 17 religious and faith-based organizations and institutions from all over the world met with the aim of relaunching the issues of dialogue and religious freedom from the heart of Central Asia, an area close to the epicenter of the ethnic-religious conflicts that followed September 11, 2001.
The Congress follows the model of the "Day of Prayer for Peace" in the world convened in Assisi by John Paul II on January 24, 2002 to reaffirm the contribution of the different religious traditions to dialogue and harmony between peoples and nations. (LF/PA) (Agenzia Fides, 12/4/2022)