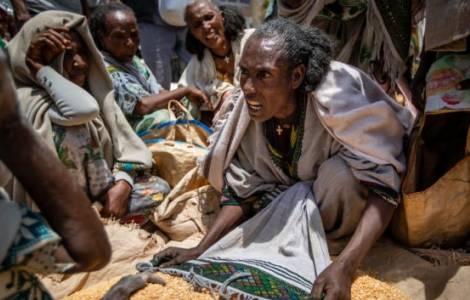 Adigrat (Agenzia Fides) - "The aid that manages to arrive, following the military truce promoted by Prime Minister Abiy (see Fides, 25/3/2022), is not changing the lives of the besieged people and all the services of basic necessities is lacking: food, medicine, all forms of communication, salaries have been blocked, banks closed, there is no free movement to and from Tigray". This is what Msgr. Tesfaselassie Medhin, Bishop of the Catholic eparchy of Adigrat denounces, on the devastating genocidal war that has been underway in the Ethiopian region since 3/4 November 2020.
The eparch, through a pastoral letter sent to Fides, addressed all the partners of the international community and United Nations agencies and launched its appeal for a rapid intervention of humanitarian aid in favor of millions of people who are dying from the famine this war is fueling.
"This devastating crisis is beyond all imagination, genocidal massacres of civilians, rape and gender-based violence, looting, fires, destruction of homes, places of worship, schools, health facilities. Everything has been destroyed. According to the UNOCHA report of November 15, 2021 - continues Msgr. Medhin – 1,7 million children across Tigray have been deprived of education in these two years". The prelate calls for the withdrawal of the occupation forces in order to allow the return of internally displaced persons to their villages and a peaceful dialogue to put an end to the crimes in progress.
"We are still shocked and horrified by the acts of brutal crimes that killed eleven people, including nine people from Tigray, who were burned alive on March 3, 2022 in the Benishangul-Gumuz region. It is tragic and unacceptable to see mothers, children and adults dying every single minute because they are deprived of the right to life and the basic services given to them by God. Ours is a further appeal to all interested and competent international communities.
Differently the world is preparing to see piles of human bodies in the Tigray region, victims of a preventable famine".
"At this critical time we desperately call on the international community to take swift action to save millions of people in Tigray from death, before it reaches an irreversible level".
In the pastoral letter, the eparch invokes peace for the suffering population of Tigray, Ethiopia and the world and thanks all those involved. "individuals, institutions, governments, who are working tirelessly to bring a glimmer of hope to the population".
In a recent report by OCHA it is noted that health services have been provided to more than 26,500 people in the Ethiopian region in one week, but an estimated 3.9 million people need health care. (AP/GF) (Agenzia Fides, 7/4/2022)