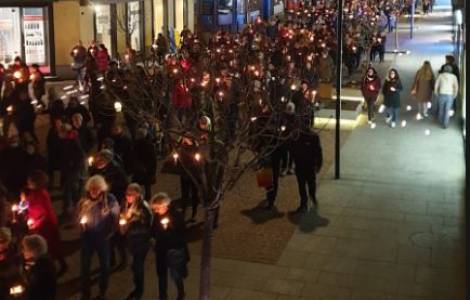 2022-12-13
Cardinal Parolin on Ukraine war: “We cannot imagine the future based on old patterns and military alliances”

Lviv (Agenzia Fides) - "The ongoing conflict evokes the ghost of a past which was considered definitively archived. Instead the bombs, the destruction, the Ukrainian and Russian deaths, the devastation of recent weeks have put us in front of a danger, a threat, always lurking. It is a cruel and senseless war, that, like every war, represents a defeat for every one, for everyone of us, Pope Francis said at the Angelus on Sunday, March 27, reiterating the invitation to repudiate war, a place of death where fathers and mothers bury their children, where men kill their brothers without having even seen them, where the powerful decide and the poor die". Thus begins the letter that Msgr. Stefano Russo, Secretary General of the Italian Episcopal Conference, sent Pope John XXIII, to the president of Pro Civitate Christiana on the eve of the march for peace in Ukraine, conceived by the Community, Don Tonio Dell’Olio. "I therefore express my appreciation for the European initiative which, between April 1 and 3, will reach the city of Lviv by caravan, organizing meetings with the representatives of the civil and religious institutions present in that city", writes Msgr. Russo.
"An important sign - comments Don Dell’Olio - because he recognizes the importance, purity and meaning of this action for peace. And it is in some way the way of the Italian Bishops' Conference to take sides with the Pope who was very clear on the story of the Ukrainian war". The initiative promoted by the Pope John XXIII Community, but which involved dozens of Catholic and lay groups of Italian civil society, started yesterday morning at dawn from Gorizia. Its main organizer, the secretary of the association named after Pope Roncalli, Pierluigi Cofano, explains that a march will take place this afternoon, April 2, around the station in Lviv "where our vehicles, 66, which brought medicines and basic necessities, will gather some families of displaced people to bring them to Italy where various municipal administrations, including Rome, have already given the welcome green light". The caravan, which arrived at the Polish-Ukrainian border last night, is made up of 221 people from various associations. Today also includes a meeting with the mayor and with the local religious authorities of Lviv, provided the situation allows it.
"The Permanent Episcopal Council - wrote Msgr. Russo in the letter addressed to Dell'Olio and the marchers - decided to promote a moment of prayer for peace during the Palm Sunday celebrations and to express closeness and solidarity to the Ukrainian Church, through the many initiatives that Caritas Italiana is coordinating".
The letter recalls that "peace is born above all in the heart of each one, from the desire to accompany each other on the journey of life, to forge relationships based on fraternity. In this sense, the Churches, in every corner of the world, can play an irreplaceable role in building a true peace, which places human dignity, respect for the rights and freedoms of every person and life at the center of attention, the construction of supportive and open communities". (EG-PA) (Agenzia Fides, 2/4/2022)

AMERICA/PERU - We ask for peace, tranquility, unity and reconciliation, based on a broad process of listening and national dialogue