ASIA/CHINA - A synodal journey in charity: the "Volunteers of the Lord" at the forefront to fight the pandemic 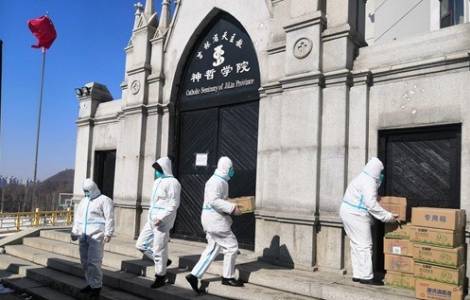 2023-01-26
Grief not removed and hope cherished. Letters and gestures of communion in the Chinese Catholic community at the beginning of the "Year of the Rabbit"

2023-01-20
Chinese New Year. Christian hope embraces the expectations and sorrows of the "great army of ChunYun"

2023-01-10
Christmas time for Chinese Catholics. When the light of Jesus crosses the days of pain

2023-01-02
Chinese bishops and the People of God pray for Pope Ratzinger: may he continue to intercede for the good of our Church from heaven

2022-12-29
When the "Union of Chinese students" of the Pontifical Urbaniana University" paid tribute to Celso Costantini, the first Apostolic Delegate in China

Rome (Agenzia Fides) - Priests who guard the quarantined areas to enforce health rules at night, the nuns who are drivers and messengers, the seminarians who load material aid, the laity who intervene in all areas where there are needs: these are the "Volunteers of the Lord" - as they have defined themselves - who draw the current image of the Catholic Church in mainland China. To combat the pandemic, there is active coordination between the local Church, Catholic charities, parishes, governmental and non-governmental organizations, in collaboration with civil authorities.
According to information gathered by Agenzia Fides, Covid-19 is still circulating strongly in several Chinese regions.
The Catholic community, engaged for over two years in the fight against the virus, has acquired some experience in coordinating and organizing material aid, but above all spiritual, moral and psychological support, which people today need more than ever, both the population and doctors, volunteers and rescuers.
During a new Lent marked by the pandemic, the Catholic community, with its many "Volunteers of the Lord", is carrying out a synodal journey of charity, based on prayer and fraternity. They thus build a "synodal Church" of communion, participation and mission, as Pope Francis has recommended since the beginning of his Pontificate. On March 19, the seminarians of the diocesan seminary of Jilin, led by the rector, loaded, sorted and distributed several trucks of aid, in the midst of the freezing cold, on the occasion of the feast of Saint Joseph, patron of the Seminary.
According to these young aspiring workers in the vineyard of the Lord, "we lived an exceptional patronal feast, an experience of charity which makes us mature spiritually". They also donated ¥5,030 (equivalent to €760) from their savings, in addition to the aid worth ¥114,455 raised with Jinde Charities. The Jilin community, under the coordination of Jinde Charities of Hebei, is mobilizing all parishes to raise funds and materials through parish wechat. The home for the elderly, an isolated village and a popular neighborhood are the preferred recipients. Tangshan community priests have been carrying out night guards in the quarantined neighborhood to impart "the spirit of serving Christ". The volunteer nuns climb the stairs thousands of times to bring food to quarantined citizens, and are happy, because "we serve Jesus". We are the image of the Catholic Church". The communities of Jiangxi and Shaanxi also shine for the commitment of the "volunteers of the Lord" on the synodal path of charity. (NZ) (Agenzia Fides, 31/3/2022)