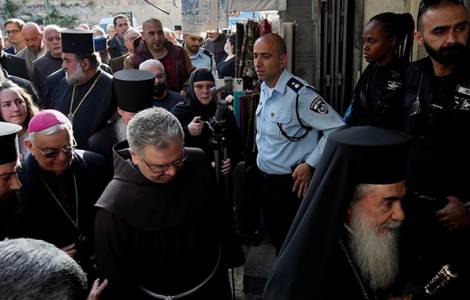 Jerusalem (Agenzia Fides) - The leaders of the churches in Jerusalem condemn the attack by settlers belonging to the Israeli organization Ateret Cohanim on Saturday, March 26, at the historic Petra Hostel near the Jaffa Gate, in the Christian quarter of the Old City. The possession of the old hotel for pilgrims is at the center of a grueling legal dispute between Ateret Cohanim and the Greek Orthodox Patriarchate in Jerusalem, which claims ownership of the property and denounces the fraudulent ways in which it was used by the organization, linked to the Israeli settler movement. On Tuesday March 29, a delegation of leaders of Jerusalem's churches, accompanied by diplomatic representatives from other countries and representatives of the Muslim community, visited the disputed building and expressed their solidarity with the building's management and staff. The delegation included, among others, the Greek Orthodox Patriarch of Jerusalem, Theophilos III, Custos of the Holy Land, Father Francesco Patton ofm, and Bishop Giacinto Boulos Marcuzzo, former Patriarchal Vicar for Jerusalem and Palestine of the Latin Patriarchate of Jerusalem. The visit to the disputed building was also attended by Hatem Abdel-Qader, in his capacity as Secretary General of the Islamic Christian Committee for Assistance to Jerusalem and the Holy Places. On the evening of Sunday, March 27, dozens of Israeli police officers and settlers from Ateret Cohanim took control of the first floor of the hotel, in an illegal act of violence, according to the management of the structure, while they have not yet been definitively carried out the legal procedures relating to the disputed transfer of ownership of the disputed property.

The area is part of the Christian quarter in Jerusalem and is located strategically near the western walls of the city, which is thriving with tourists and pilgrims visiting the Church of the Holy Sepulchre.
Petra Hotel, is claimed by the Israeli settler movement, which for decades appears to have been involved in property purchases in East Jerusalem, particularly focused on the Old City's Christian Quarter.
The legal dispute over the hotel (see Fides, 26/6/2020) has been going on for 18 years. The hotel was sold in 2004 along with the Hotel Imperial, owned by the Greek Orthodox Church of Jerusalem. News of the sale had sparked protests and resentment in the Greek Orthodox Christian community, culminating in the Holy Synod's dismissal of Greek Orthodox Patriarch Irenaeus I for unlawful alienation of patriarchal properties. In August 2017, the Jerusalem District Court had already rejected legal action taken by the Greek Orthodox Patriarchate of Jerusalem to seek confirmation that Ateret Cohanim's acquisition of the disputed property was "illegitimate". Following this judgment, the Patriarchs and the heads of the Churches of Jerusalem signed a joint document (see Fides, 5/9/2017) in which they condemned the "systematic attempt to undermine the integrity of the Holy City" and "to weaken the Christian presence in Holy Land" and also described the project as "violations of the status quo" of the Holy Places. The joint document, which was also signed by the Greek Orthodox Patriarch of Jerusalem, Theophilos III, and the then Apostolic Administrator of the Latin Patriarchate of Jerusalem, Archbishop Pierbattista Pizzaballa, strongly opposes "any measure" taken by "any authority or group" with the result that "laws, agreements and regulations that have governed our lives for centuries" are violated and subverted. The Jerusalem Orthodox Patriarchate had appealed the 2017 ruling to the Supreme Court of Israel, which on June 10, 2019 upheld the legality of the property transfer. The property was lawfully acquired by foreign brokers on behalf of Ateret Cohanim. In December 2019, litigation resumed after a Jerusalem District Court judge challenged the Supreme Court's earlier ruling, opening the possibility of a new trial on the contentious issue. On June 24, 2020, the Jerusalem District Court finally denied the Greek Orthodox Patriarchate of Jerusalem's motion to annul the sale of the patriarchal properties to Ateret Cohanim. With this decision by the Israeli court, the legal tug-of-war over the disputed plots of land in the Old City of Jerusalem seemed finally over. At the time, the Greek Orthodox Patriarchate of Jerusalem expressed its "astonishment" at the District Court decision, which it called unjust, and indicated its intention to appeal again and bring the matter back to the Supreme Court of Israel. (GV) (Agenzia Fides, 30/3/2022)