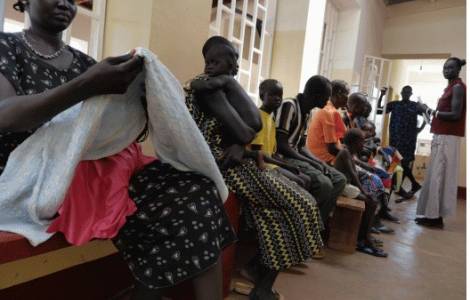 Padua (Agenzia Fides) - "In all the hospitals where we operate, from Rumbek in South Sudan to Wolisso in Ethiopia, passing through Tosamaganga in Tanzania, patients with tuberculosis arrive. In some countries, such as Angola, the mortality rate is 62/100,000 inhabitants", said Fabio Manenti, project manager for Doctors of Africa Cuamm, ahead of World Tuberculosis Day, which is celebrated every year on March 24. "We have never stopped taking care of TB patients in Africa, even when Covid-19 began to spread across the continent, even when the sick did not come to the hospital to receive treatment due to the many lockdowns", reads the note sent to Fides.
More than 4,100 people around the world die from tuberculosis and almost 30,000 fall ill every day, despite it being a preventable and curable disease. CUAMM continues its commitment in the fight against this silent disease which is much more widespread than it seems. Uganda and Angola are just two examples of how teamwork, together with the community, makes a difference.
"Many people here think that having TB automatically means having AIDS. This is a myth that needs to be dispelled. I am happy to have had this training and to work for my community. This way, I can really help my people". Paul Lotyang is 57 years old and lives in Kotido, Uganda, with his three children. His wife died. He was chosen and trained by CUAMM as a community activist. He goes from village to village and tries to identify suspected cases of tuberculosis. He cannot read or write, but he has learned to identify the signs of the disease and when he identifies a case, he accompanies him in person to the health center and awaits the diagnosis. He is a key person in the contact tracing process and in establishing a direct relationship with the sick, whom he also accompanies to take their medication, so that they do not stop taking care of themselves". "In Uganda - continues a CUAMM staff representative - teamwork with communities is a winning strategy. One of the most affected areas is Karamoja, a very poor region with a semi-nomadic and where there are about 6,000 cases of tuberculosis per year. Thanks to the support of AICS and FAI, CUAMM guarantees an all-round intervention: from supervision in the most remote villages to mobile clinics, from accompanying the sick to taking medicines at distribution points, to treatment and hospital care. The commitment covers 5 districts, 26 counties, for a population of approximately 600,000 people and involves more than 2,200 activists. In 2021, 83,566 people were monitored for Tb, 15,991 suspected patients were sent to hospital to confirm the diagnosis, and 1,272 people were diagnosed and treated".
"Important work is also being done in Angola, where a project is underway to combat Tb and Tb/Hiv co-infection in times of Covid-19. The project aims to improve early diagnosis, referral and treatment tuberculosis and tuberculosis/HIV patients, in the province of Luanda, by investing in the training of health workers, providing laboratory equipment and reagents, providing support for data management and monitoring of patients, through community health workers. 'Investing in TB. Saving lives' is the call launched by the World Health Organization for the 2022 edition, which urges people to continue their daily work, in a silent but constant fight against a disease so widespread and by no means defeated. More than one million people died from TB in the world in 2020; about 10 million of those who are ill, 25% live in Africa. (AP) (Agenzia Fides, 23/3/2022)