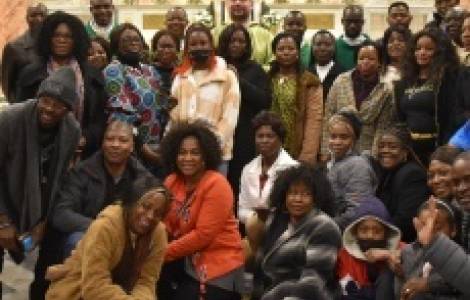 Tel Aviv (Agenzia Fides) - In the difficult situations they face, the communities of migrants and asylum seekers increasingly characterize the face of the ecclesial communities of the Holy Land, even in their spiritual traits. This is also what emerges from a survey conducted by Cécile Leca and disseminated by the official organs of the Latin Patriarchate of Jerusalem. In 2011, in order to take charge of the pastoral care of the growing number of migrants and Catholic asylum seekers in the Holy Land, a special coordination was set up, which then became a real Vicariate for migrants and asylum seekers of the Latin Patriarchate of Jerusalem. The Patriarchal Vicar who is currently entrusted with the task of coordinating the pastoral care of migrants and asylum seekers is Father Nikodemus Schnabel, of the Order of St. Benedict (OSB). The Vicariate is served by communities of Catholics mainly from the Philippines, Sri Lanka, India, Eritrea, Ethiopia, and smaller groups from Ukraine, Russia, Romania, China and several countries in sub-Saharan Africa. Most people from these communities live in the Tel Aviv area, which offers more job opportunities. Besides several chapels, mainly in the Jaffa area, the most popular place of worship for the migrant community is the church dedicated to "Our Lady Woman of Valor", south of Tel Aviv, and it was built with the help of the Order of the Knights of the Holy Sepulchre. Every weekend, thirteen Eucharistic liturgies are celebrated in the church, in different languages. The problems faced daily by the communities of migrants and asylum seekers with the support of the Patriarchal Vicariate are mainly economic, legal and health-related. Many families are made up of single mothers with their children, and many of them live in constant fear of being expelled, in particular because of the difficulty in obtaining the renewal of their residence permit. "Most of them have tragic or traumatic stories, explains Father Nikodemus, they experienced terrible things before arriving here, others are victims of human trafficking...". In the harshness of their past experiences and in the daily difficulties they have to face - underlines the Patriarchal Vicar - the communities of migrants and Catholic asylum seekers who have arrived in the Holy Land show the world the grace of their faith in Christ with a gratuitous and comforting vivacity, which is reflected in the joyful recollection with which they participate in liturgical celebrations. "In truth", Fr Nikodemus confides with a sincere heart, "I have the impression that they are closer to God than I am". (GV) (Agenzia Fides, 10/3/2022)

ASIA/BANGLADESH - Men of service and proclamation of the Gospel: 13 new deacons for the Church, three of them tribal