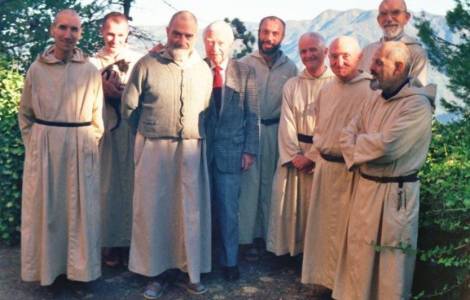 Rome (Agenzia Fides) - Involve the university community and widen the circle of people who can learn about the spiritual heritage of the monks of Tibhirine, martyrs in Algeria in 1996, their writings; and promote the desire to develop theses on one or several of them, touching on different aspects such as theology, spirituality, literature, music, missiology, liturgy, and dialogue. With this objective, on December 3 and 4, 2021, the "Colloquium for the 25th anniversary of the martyrdom of the seven brothers" was held in Rome, at the Pontifical Athenaeum Sant'Anselmo, a moment of reflection on the writings and the spiritual heritage of the monks of Tibhirine, martyred in Algeria in 1996.
Organized by the Association for the Protection of the Writings of the Seven Atlas and the Scientific Committee of the Tibhirine Writings, under the patronage of the Pontifical Council for Interreligious Dialogue, the meeting was attended by numerous scholars and students, present or connected from a distance, from all over the world. The first day, reserved for students, aimed to involve the academic community in the study and deepening of the spirituality of the nine Trappists who lived together in the Tibhirine monastery. The second day, open to the public, had a more popular purpose, intended to spread the message - still very current - to the world, of the monks through their writings. On the sidelines of the Colloquium, organized in the year of the twenty-fifth anniversary of the martyrdom, Agenzia Fides met with Father Thomas Geogeon, abbot of Trappist de Soligny, France, and postulator of the cause of beatification of the 19 martyrs who rose to the altars on December 8, 2018, and Marie-Dominique Minassian, researcher at ISTAC and SNSF (University of Fribourg, Switzerland) in charge of the research project supported by the Swiss National Fund Les éscrits de Tibhirine and the scientific committee The writings of Tibhirine. (...) [continues]