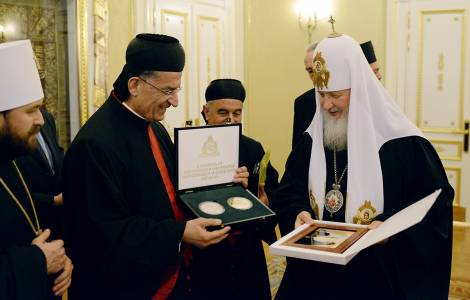 2022-06-03
"We are not celebrating two dead, but two risen in Christ". Lebanese Christians celebrate the beatification of Capuchins Leonardo Melki and Thomas Saleh, missionaries and martyrs

Bkerké (Agenzia Fides) - The war in Ukraine is a "surrender to the logic of conflict and violence" and marks "the failure of all political and diplomatic attempts to avoid conflict", said "with regret" the Maronite bishops, on Thursday, March 3, for their monthly meeting at the Patriarchate of Bkerké, chaired by Patriarch Béchara Boutros Raï. In the face of the tragic events in Ukraine, the Maronite bishops prayed for all the victims of the war and for the recovery of the wounded. They pray for consolation for all those affected and for the prayers that are being heard in all parts of the world for an end to the wars and outbreaks of conflicts scattered in the various regions of the world, "especially in the Middle East" to be heard.
At the beginning of Lent, the Maronite bishops, in their message, invite all the baptized to live this season with prayer, fasting and acts of charity, and "to endure the trials they are facing at this difficult time, sharing their pain with the salvific sufferings of Christ, to prepare to share with him the joy of redemption and the glory of the resurrection".
At the end of March 2019, as reported by Agenzia Fides (see Fides 28/3/2019 and 3/4/2019), Lebanese President Michel Aoun, after meeting the Russian President, Vladimir Putin in Moscow, had publicly expressed his gratitude to Russia also for the constant support for Christian communities in the Middle East. Aoun's statements had provoked criticism from groups and individual political representatives from various backgrounds.
The Rassemblement Saydet el-Jabal, a cultural association for the promotion of the culture of coexistence between Christians and Muslims, without explicitly naming Aoun, had issued a statement to underline that "the protection of Christians can only take place by living together with Muslims, not through research of ambiguous protections".
On that occasion, Farès Souhaid, President of Saydet el Jabal, had criticized via twitter the thanks of President Aoun to Putin. The Christian George Sabra, President of the Syrian National Council (anti-Assad Syrian opposition group) also criticized Aoun's thanks to Putin.
"The Christians in the East who brought Christianity to the whole world" wrote Sabra on his twitter account "do not need anyone's protection. They are in their own land, among the children of their country, with whom they share the same values". Similar criticisms of Aoun's thanks for Russia's role in the Middle East came from Druze leader Walid Jumblatt, leader of Lebanon's Progressive Socialist Party. "It seems that some people do not want to learn lessons and experiences from the past and its tragedies. We have come back to the concept of the alliance of minorities instead of focusing on the importance of citizenship and the joint declaration of Abu Dhabi between the Pope and the Grand Imam of Al-Azhar". (GV) (Agenzia Fides, 4/3/2022)

ASIA/SYRIA - Attack on the inauguration of the church of Saint Sofia, wanted by the Russians