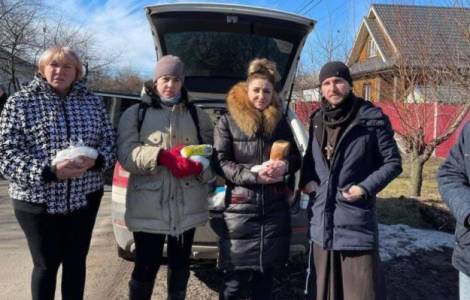 Konotop (Agenzia Fides) - "Currently the city of Konotop is under siege and at all entrances there are Russian checkpoints that prohibit civilians from leaving the city and do not allow the delivery of food and medicine.
Therefore, due to these deprivations, there is a great shortage of fuel, medicines and food". Thus reports in a video message sent to Agenzia Fides, Friar Minor Fr. Romualdo Zagursky OFM, who serves in the city of Konotop, in northeastern Ukraine, 90 kilometers from the border with the Russian Federation. "Together with our parishioners - he explains - we welcome various people into our Convent, whom we have never abandoned, in order to offer a safe place to stay overnight during the bombings, especially for the inhabitants of the city who live in buildings and who do not have access to basements or anti-aircraft shelters.
Every day, from 9 in the morning - he specifies - we queue up to buy bread, milk, food and medicines.
Father Zagursky recounts these difficult days of war: "At around 11 am on March 2, a Russian armored transporter arrived to begin negotiations with the local authorities. I was present at this event, because at that time I went to buy medicines for pregnant women in the hospital. The Russian military - continues the friar - threatened to carry out artillery bombardments and to destroy the city in case of attacks by the local population and gave an hour to decide".
Despite the tension and fear, the faithful united in prayer: "The evening before - the Franciscan reports - I advised our parishioners that the Holy Mass would be celebrated at 12 noon. We prayed while the negotiations were taking place, on which the fate of the city of 80,000 inhabitants depended. All those present at the Mass were able to experience how timely the Word of God is, as well as the words of the First Reading of the Book of Joel (Joel 2: 12-18) "Gather the people, notify the congregation; Assemble the elders, gather the children and the infants at the breast; Between the porch and the altar let the priests, the ministers of the LORD, weep, And say: Forgive, O Lord, your people". "Each of these words - Father Romualdo tells Fides - confirmed the presence of the Lord and gave hope for the present day we are living. Immediately after the end of the liturgy, we learned that the talks had ended peacefully, on the condition that neither side provokes each other". "I therefore believe that today it was the work of God's grace that saved our city from devastation and from a large number of civilian victims", he says.
In conclusion, the religious thanks "for the prayers of many people around the world, for the donations from various countries and cities", and launches an appeal: "I ask for a further prayer for peace and that this conflict ends as soon as possible". (ES-PA) (Agenzia Fides, 3/3/2022)