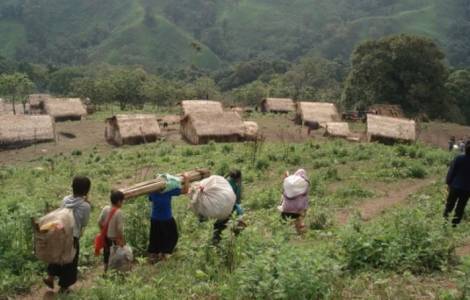 Pekhon (Agenzia Fides) - The Myanmar army has arrested two Catholic priests who were on their way to help internally displaced people in Shan State, in the eastern part of Myanmar. As Fides learned from the local Church, Father John Paul Lwel, a priest in the diocese of Pekhon, and Father John Bosco, a priest in the Archdiocese of Taunggyi, while traveling with two drivers and a young student, were stopped at a checkpoint and arrested by army soldiers on February 21. The arrested priests belong to the "St. Therese Little Way Missionary Institute", a local Burmese religious congregation. The small group wanted to bring humanitarian aid to the internally displaced people in the village of Le Htun, which is part of the municipality of Moebye, in the diocese of Pekhon. Their intention was also to accompany some priests from Pekhon and temporarily transfer them to Taunggyi, in areas less exposed to fighting, in order to protect them.
As reported to Fides, the local clergy of Pekhon are in fact subjected to acts of intimidation and violence. In the municipality of Moebye, soldiers broke into the house of the Catholic priest residing in the city and stole the money that belonged to the Church and was used for pastoral needs and to help refugees. Confirming that the two priests are still under arrest, Fides sources in the diocese of Pekhon say that the reason for their arrest remains unknown. The Bishops of the dioceses of Pekhon and Taunggyi are trying to get in touch and meet with the regional military leaders in order to obtain an immediate release of the Catholic delegation. The arrest of the priests took place as the fighting between the military and the People Defense Forces (PDF) intensified in the municipality of Mobye and in other places in the diocese of Pekhon, where the military junta ordered air strikes, deployed armored vehicles and heavy weapons. Thousands of people, including many Christians, have been displaced by the ongoing fighting. Many Catholics of the diocese of Pekhon fled their homes and took refuge in the churches and structures of the Archdiocese of Taunggyi.
The diocese of Pekhon covers the southern part of Shan State and is one of the most affected areas - together with the diocese of Loikaw in Kayah State - due to the escalation of the conflict between the military and the People's Defense Forces, joined by the rebel forces of the Karenni army and other ethnic armies, which have been fighting each other for years.
More than 15 villages in the diocese of Pekhon, mostly inhabited by Catholics, were attacked and devastated by the army. At least 70 young Catholics died in clashes with local forces, according to Fides sources. Thousands of Catholic faithful fled their homes in the diocese of Pekhon and took refuge in churches of the archdiocese of Taunggyi. According to information collected by Fides, nine Catholic priests from the dioceses of Banmaw, Mandalay and Hakha were arrested in 2021 on suspicion of supporting rebel forces. (JZ-PA) (Agenzia Fides, 25/2/2022)