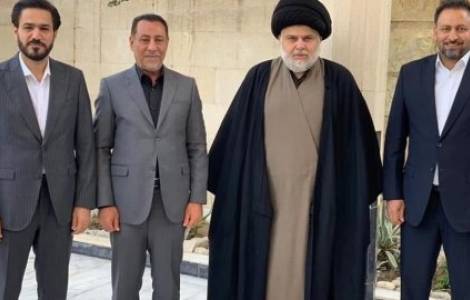 Baghdad (Agenzia Fides) - There are already more than 120 real estate assets - land and houses - returned to their legitimate owners by virtue of the campaign promoted by the Shiite leader Muqtada al Sadr and his Sadrist Movement in favor of Christian citizens and Mandeans who in recent years had suffered illegitimate usurpations of their properties by individuals or organized groups. The provisional result of the restitution campaign was released after a delegation of members of the Committee created ad hoc by the Sadrist Movement carried out an inspection on Monday, February 21 in some of the real estate properties returned to their legitimate owners.
Among the participants in the inspection included Hakim al-Zamili, Vice President of Parliament, Hassan al-Kaabi, Vice President of the Sadrist bloc in the Iraqi Parliamentary Assembly, and Abu Mustafa al Hamidawi, an officer of Saraya al-Salam ("Peace Brigades"), a paramilitary formation headed by the Sadrist movement. Al-Zamili, in some statements also reported by the online newspaper ankawa.com, confirmed that in the recent past groups he defined as "real estate mafias" had taken advantage of the precarious security conditions to illegally appropriate houses and land belonging to minority communities, trusting that such groups would not have had the opportunity to react in the face of such acts of injustice. The Sadist Movement - added al Zamili - claims its role as protector "of every weak person", and will fight by any legal means the prevarications perpetrated to the detriment of minority communities. The recovered properties are houses, agricultural land, commercial buildings, even small factories and shops, scattered between the cities of Baghdad, Mosul, Basra and Kirkuk.
The Iraqi parliamentary elections on October 10, 2021 saw a clear affirmation of the Sadrist movement, which now occupies 73 of the 329 seats available in Parliament. The elections have reduced the parliamentary weight of the pro-Iranian Shiite parties, which severely contested the results.
Up to now it has not been possible to proceed with the formation of a new government. Nor to the election of a new President. At the beginning of 2021, as reported by Fides (see Fides, 4/1/2021), the Iraqi Shiite leader Muqtada al Sadr had ordered the creation of an ad hoc Committee, in charge of collecting and verifying news and complaints regarding the cases of illegal expropriation of real estate property suffered in recent years by Christian and Mandaean owners (religious minority following Gnostic doctrines) in various regions of the country. The intent of the operation sponsored by the Shiite leader - the statement read - was to restore justice, putting an end to the damaging violations of the property rights of "Christian brothers", even when the perpetrators were persons affiliated with the same Sadrist Movement . The request to report cases of illegal expropriations suffered was also extended to Christian families who have left the country in recent years, with the request to send the Committee the reports of fraudulent usurpations suffered.
The phenomenon of illegal abduction of Christian homes has also been able to take hold thanks to connivance and cover-ups by corrupt and dishonest officials, who put themselves at the service of individual impostors and organized groups of fraudsters (see Fides, 23/7/2015).
The "legalized" theft of Christian families' property is closely linked to the mass exodus of Iraqi Christians, which has intensified since 2003, following US-led military interventions to overthrow Saddam Hussein's regime. Many scammers have taken possession of houses and land that have remained unattended, relying on the easy prediction that none of the owners would return to claim legitimate possession.
The moves of the Muqtada al Sadr Movement have triggered a sort of competition that sees various acronyms and political blocs competing for the title of "protectors" of minority communities, including Christians. A singular competition which, however, does not seem to free itself from the temptation and illusions - cultivated in different environments and ways - of making the present and future of Christians in Iraq and in the Middle East totally depend on the guaranteed availability of access to money and real estate or from the reaffirmation of its socio-political relevance. Forgetting - as the Palestinian Archbishop Michel Sabbah, Patriarch Emeritus of Jerusalem of the Latins suggested a few months ago, in prophetic words - that the uncertainties about the future of Christians in the Middle East "are not primarily a question of numbers, even if numbers are important, but they are a question of faith". (GV) (Agenzia Fides, 24/2/2022)

AMERICA - Exclusion of poverty in the South American suburbs: new Report of the Dominican Missionaries