AFRICA/ETHIOPIA - In the bloodied Tigray region, the heparch of Adigrat calls for solidarity with the bishops 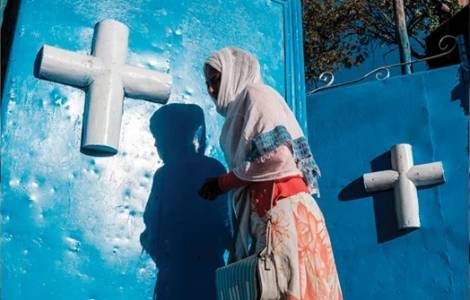 Adigrat (Agenzia Fides) - "The atrocities committed so far against the Tigrinya population are not only against the right to the existence of human beings, but also against God who created us", declared the Bishop of the Catholic Eparchy of Adigrat, Msgr. Tesfaselassie Medhin, in a document released by the Eparchy on the current situation in the Ethiopian region.
The Eparch of Adigrat, like other religious institutions in Tigray, deeply share the pain and suffering of the war crimes that have been perpetuated for more than 15 months against humanity and of the genocide committed on the Tigrinya people and confirm total solidarity and firm condemnation ( see Fides, 1/2/2022).
"The Ethiopian Bishops' Conference, formed by the Catholic dioceses of the country, has the Christian obligation to confirm towards the Eparchy of Adigrat a spirit of brotherhood with one another", declared Msgr. Medhin. "Particularly in these times of enormous difficulties due to the terrible tragedies inflicted on pastoral agents, the faithful, and all the people of Tigray. It is in this context that the Eparchy constantly invites the bishops of the country to condemn with words and actions the crimes committed against the Catholic faithful, the clergy, men and women religious and the entire people of Tigray" (see Fides, 18/1/2022).
The eparch continues its statement urging the Ethiopian bishops to speak out for the voiceless affected by this tragedy.
"While the Catholic institutions and organizations of other countries, in particular the Eritrean Bishops' Conference, a member of the Association of the Bishops' Conference of East Africa, the Holy Father and many others have loudly urged the parties to stop the war, to resolve through dialogue and allow humanitarian access to all the needy, the Ethiopian Bishops' Conference, in the last 475 days since the start of the war in Tigray, has failed to express its voice for the voiceless".
"The Eparchy of Adigrat renews its invitation to the President and the members of the Bishops' Conference to remain faithful to the symbol of unity and solidarity in the ministry of Evangelization that we all represent together, the mission and values of the Conference itself, and to support all those in difficulty. Once again - insists Msgr. Medhin - we officially invite you to express your solidarity in favor of the suffering people and to exert peaceful and tangible pressure for an end to this genocidal war. For its part, the Eparchy of Adigrat reconfirms full solidarity, prayer and works of charity".
The eparchy of Adigrat, as an organism of the Universal Catholic Church, responds directly to the Holy See, the Vatican whose head is the Holy Father, the Pope. It is closely connected with the Catholic Bishops' Conference on evangelization and social development programs, as well as being a member of the Episcopal Conference of Ethiopia and other organs of the Catholic Church in East Africa and throughout Africa. (GF/AP) (Agenzia Fides, 24/2/2022)