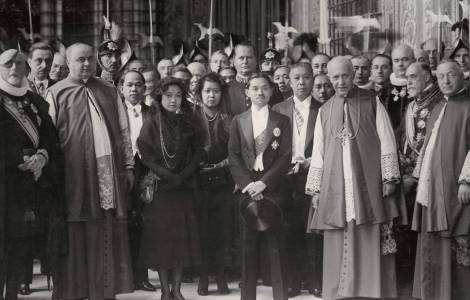 Paris (Agenzia Fides) - The seeds of evangelization in Thailand, planted three and a half centuries ago by missionaries sent from France, by the Society for Foreign Missions of Paris (MEP), in response to the invitation of the Vatican Congregation for "Propaganda Fide ", are now flourishing across the territory. A missionary exhibition set up by the fathers of the MEP, in collaboration with the Bishops' Conference of Thailand, which actively supported this initiative, recalls and testifies it. The exhibition is aimed at the most diverse public, offers the educational tools necessary for a broad understanding of it and can now be visited in Paris, at the MEP headquarters, while the Thai Church hopes to be able to admire it soon in Thailand as well.
The exhibition is divided into different sections, to remember the richness of the charitable commitments carried out today by the missionaries; the constancy of Thailand's diplomatic relations with the Holy See since the mid-nineteenth century; the cancellation of the presence of apostolic vicariates at the end of the 18th century; finally, the establishment and life of the first large embassies under the reign of Louis XIV.
Consisting of about one hundred works (sometimes unpublished) taken from the collections of the Foreign Missions (Library, Archive, Museum), the exhibition is complemented by loans from public or private collections.
It presents some documents from the archdiocese of Bangkok, from Thai religious institutions or even from the Thai Bishops' Conference.
The exhibition particularly recalls the work of the missionaries Pierre Lambert de La Motte (1624-1679) or François Pallu (1626-1684) who created educational and charitable institutions (schools, high schools, universities, colleges, dispensaries, hospitals, etc…) addressed indiscriminately to the entire population, making a non-negligible contribution to the growth and human and cultural development of the country. Illustrating from the beginning the dynamism of the Church of Thailand in all its diversity, the exhibition goes back to the past to better understand the fruitfulness of the patrimony received: the parish of St. Joseph of Ayutthaya is one of the emblematic examples.
This church, which resisted the destruction of the former capital of the Kingdom of Siam (1767) and the almost complete annihilation of the original mission, now houses an important college on its territory, attended by hundreds of children. A 168-page color catalog will preserve the memory of this event, but will also present an eminently scientific character (PA) (Agenzia Fides, 22/2/2022)

ASIA/PAKISTAN - The cross of Kovardo and symbols of the Christian faith in Northern Pakistan: new studies are being prepared