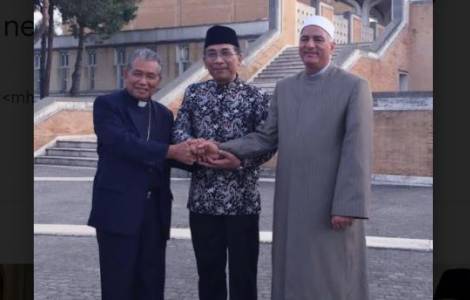 2022-06-20
A 'big sea' of social charitable activities: the Camillians in Flores after the Covid-19 pandemic

2022-06-18
Resignation of the Bishop of Sanggau and appointment

2022-06-15
Civil society and religious communities: "No" to an entrance fee for the Borobudur temple and places of worship

Jakarta (Agenzia Fides) - "Nahdlatul Ulama (NU) remains the guardian of the Republic of Indonesia and Pancasila, two key themes of our national political platform", said the new leader of the organization, Yahya Cholil Staquf, elected as the new chairman of the group's Supreme Council in December 2021, alongside Miftachul Akhyar, appointed as the organization's spiritual leader. The NU, the country's largest moderate Muslim organization with over 92 million members, has its stronghold and main base on the island of Java, Indonesia's most populous island. The Nahdlatul Ulama, observers note, is strategically important in maintaining a secular conception of the state and preventing the formation of radical Muslim groups. My main concern", said Yahya Cholil Staquf, "is to revitalize the fundamental mission of the NU", a very influential mass organization in terms of mentality and culture in the third largest democracy in the world and in the most populous Islamic majority state in the world (over 270 million inhabitants). "The new leader explained that the NU has at least 540 regional offices across the country. In my meeting with local NU representatives, I told them that the new leadership will strive not to seek political power or status in government, but to revive the organization as a grassroots socio-economic-cultural power". "Gus Yahya", as NU followers call him, argues that "being different is fine, there is no need to argue with radical Muslim groups about different lifestyles, white clothes, etc. But NU is and will be the guardian of the nation, both of the unity of the Republic and of the Pancasila (the "Charter of the five principles" which underlies the Republic, ed). In this common framework, being different will never become a big problem", he added. "Yahya Cholil Staquf has been a key figure in the promotion of interreligious dialogue in Indonesia for many years now", notes to Fides, the Archbishop of Pontianak Msgr. Augustinus Agus. The Archbishop recalls that Gus Yahya personally asked him to accompany him during his visit to the Vatican in 2019, in his meeting with Pope Francis and in his meeting with Cardinal Miguel Ángel Ayuso Guixot, President of the Pontifical Council for Interreligious Dialogue, noting the fruits of dialogue, friendship, and good relations already established with the leader of Nahdlatul Ulama. (MH-PA) (Agenzia Fides, 17/2/2022)