AFRICA/KENYA - Attention and respect: the health care of Camillian missionaries towards the most vulnerable sections of the population 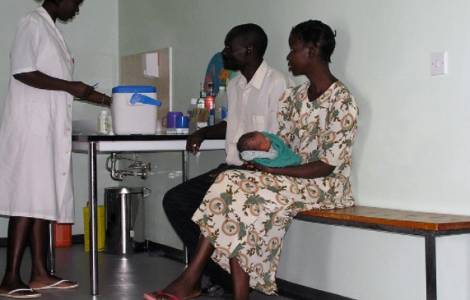 2022-11-04
Resignation and appointment of bishop of Kitale

2022-08-06
"We are each other's guardians", the expectation of the next elections increases in the country

Karungu (Agenzia Fides) - "All the sick have the right to care, adequate assistance and respect". This is the goal of the St. Camillus Mission Hospital in Karungu (see Fides, 26/11/2004). The hospital, founded and run by the Camillian missionaries (MI), offers service for the most destitute and suffering. It is located on the shores of Lake Victoria, in the Nyanza region, one of the poorest areas in the country and one of the most affected by HIV/AIDS. "About a third of the population is HIV-positive, especially women", say the Camillians who have been working in the facility for more than twenty years in order to offer the best care for the recovery of health to those most in need, without distinction of faith or social status. "Mothers and children, but also men are often victims only for situations and traditions that are not sought after but rather imposed - reads the note sent to Fides.
The hospital tries to offer care, guarantee health care, food, and everything a hospitalized person needs in a context of attention and respect, with a view to guaranteeing health care to all those who need it, in particular the most vulnerable sections of the population.
"For the local population, however, the need for treatment and hospitalization increases for all illness situations, both those originating from the lack of immune defenses, and common ones including malaria. The combination of AIDS and Tuberculosis is very widespread, usually in quite severe forms. The patient who comes to St. Camillus is asked, when possible, to contribute financially, even if it is not sufficient for the ordinary management of the structure".
The hospital, which serves a population of about 250,000 inhabitants of whom more than 50% is under the age of 15, began its activity in 1997 and, in addition to the assistance and care of sick people, seeks to promote education health and prevention with particular attention to the AIDS problem. It promotes meetings and seminars. It encourages solidarity groups between people affected by or infected with the HIV/AIDS virus. (AP) (Agenzia Fides, 10/2/2022)