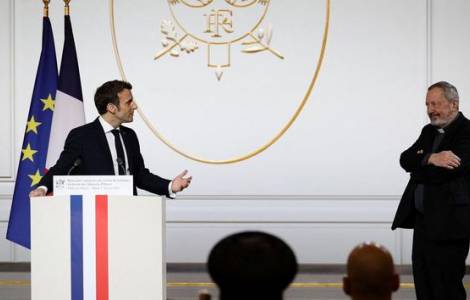 2022-05-17
Beatification of Pauline Jaricot in Lyon: local initiatives and events

Paris (Agenzia Fides) - While the official visit of Archbishop Paul Richard Gallagher, Secretary for Relations with States of the Vatican Secretariat of State is underway, French President Emmanuel Macron announced in Paris the doubling of the funds earmarked by the Élysée to support the network of Christian schools in the countries of the Middle East. The French Head of State announced the decision taken in favor of Christian educational establishments in the Middle East on the evening of Tuesday February 1, when he received 150 guests from associations and groups committed to supporting Christian communities in the Middle East at the Elysée Palace. During the evening, Monsignor Pascal Gollnisch, director of the Œuvre d'Orient (association directly involved in the collection and allocation of funds to Christian schools in the Middle East) was decorated with the Legion of Honor. "Supporting Eastern Christians", declared President Macron in his speech during the evening, "is a secular commitment of France, a historic mission", which "responds to the need never to give up the fight for culture, education and dialogue in this troubled region". The annual funds allocated by the French government and l'Œuvre d'Orient to support Middle Eastern Christian schools in a state of difficulty will increase from 2 to 4 million euros. Macron also announced that France would renew its contribution of 30 million euros to the International Alliance for the Protection of Cultural Heritage in Conflict Zones, created in 2017 with the United Arab Emirates. The French fund for Christian schools in the Middle East, created in January 2020 on the initiative of the Œuvre d'Orient, supported 174 schools in 2021, including 129 in Lebanon, 16 in Egypt, 7 in Israel, 13 in the Palestinian Territories and 3 in Jordan. Several French observers and commentators link the electoral campaign for the upcoming presidential elections to the recent attention paid by national politicians to events and problems of Christian communities in the Middle East. The trips made to Armenia in December by journalist Eric Zemmour (candidate "outsider" of the anti-globalization right) and Valérie Pécresse (candidate of the neo-Gaullist Republican Party) were also read in this context. The links between France and many Christian communities in the Middle East - writes Isabelle de Gaulmyn in La Croix - "are old, they resisted left-right alternations, up to Emmanuel Macron, passing through Nicolas Sarkozy or François Hollande. But it is totally indecent to use them as an electoral weapon, and to take them hostage for internal, sometimes xenophobic aims". In the convulsions that have rocked the Middle East for decades, many signs suggest that support for communities Christians in the Middle East has also become a terrain of political and geopolitical confrontation and competition. "That of the West defending Christians in other regions of the world is a legend that has done so much damage", declared the Patriarch Chaldean Louis Raphaël Sako to Fides at the end of August 2021, commenting on the visit made by French President Macron to the Iraqi city of Mosul. (GV) (Agenzia Fides, 2/2/2022)

AMERICA/MEXICO - Bishops: “Nothing must distract us from the essential task of education. Peace is possible. Educating to build it is a priority"