ASIA/LEBANON - John Paul II and "Lebanon-The Message". A Symposium to seek points of reference in the heart of the Lebanese crisis 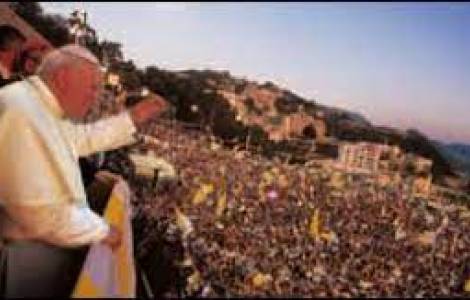 Kaslik (Agenzia Fides) - "Pope John Paul II and Lebanon the Message", is the title of the three-day Symposium scheduled at the Holy Spirit University of Kaslik (USEK), starting on February 2nd. The opening session: speeches by Abbot Neemtallah Hachem, Superior General of the Lebanese Maronite Order, by Farid el Khazen, Ambassador of Lebanon to the Holy See, and of Archbishop Paul Richard Gallagher, Secretary for Relations with States within the Secretariat of State. For weeks, some media in Lebanon and the rest of the world have been focusing the spotlight on the participation of the Vatican High Representative in the Conference. According to some media interpretations, the trip of Archbishop Gallagher to Lebanese land would mainly serve to "test the ground" in view of an upcoming visit by Pope Francis to the Land of Cedars. In reality, if we consider the contents and promoters of the Symposium, and the host institution itself, it is worth noting that it takes on a much more important "strategic" significance, in the context of the dramatic historical phase that the Lebanese nation has gone through.
The entire Symposium looks at the Lebanon affair starting from the relationship between the Pontificate of John Paul II and the Land of Cedars, with attention focused above all on the post-Synodal Apostolic Exhortation "A new hope for Lebanon", signed by Pope Wojtyla in Beirut on May 10, 1997, on the occasion of his apostolic visit to Lebanon.
In 2022, 25 years have passed since the publication of that key text. In the confusion and uncertainty that surrounds the present, in a country exhausted by institutional paralysis and the economic crisis, the Patriarchs and Bishops of the Catholic Churches are looking for points of reference in the past, and they wanted to highlight the commemorative anniversary of that document, born in a time of hope, when in Lebanon a phase of rebirth seemed to be taking place in a stable form, after the ferocious years of the civil war. "Lebanon" wrote John Paul II to the Lebanese Catholic bishops on 7 September 1989, when the fratricidal conflict was still ongoing "is something more than a country: it is a message of freedom and an example of pluralism for the East as for the West".
Even in that letter and in that same formula from the past, which struck the Lebanese so much and also echoes in the title of the Symposium, the leaders of the local Catholic communities continue to look for a compass that guides them in the confusing and disturbing present. The numerous speakers, many of whom, for personal reasons, also have personal memories of the tragic time of the civil war, will articulate their interventions in four sessions, focusing attention on the historical path of the Lebanese nation and also on the peculiarity of Islamic-Christian relations in the Land of Cedars. In the fourth and final session, an attempt will be made to link the Wojtylian formula of the "Lebanon-Message" to the suggestions and perspectives inspired by the Document on Human Fraternity, signed in Abu Dhabi on February 4, 2019 by Pope Francis and the Sunni Sheikh Ahmed al Tayyeb, Great Imam of Al Azhar.
The University of the Holy Spirit, seat and sponsoring body of the Symposium, Athenaeum of the Lebanese Maronite Order, is a historical heritage of the Maronite identity, also from a theological studies perspective. Kaslik is located near the seat of the Maronite Patriarch, and during the years of the civil war it also became a military defense base in Lebanon torn apart by sectarian clashes. (GV) (Agenzia Fides, 28/1/2022)

ASIA/KAZAKHSTAN - The Bishop of Almaty: "The Pope's visit to this land will bear many fruits"