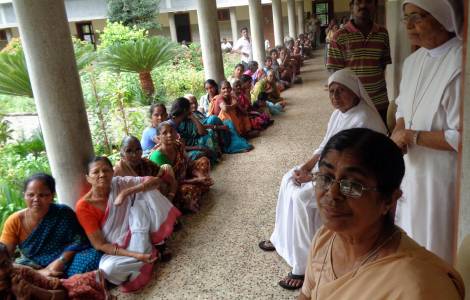 Vatican City (Agenzia Fides) - According to the latest "Statistical Yearbook of the Church", the Catholic Church operates 532 institutions for lepers worldwide, of which 201 are in Africa, 201, 41 in America, 269 in Asia, 19 in Europe and 2 in Oceania. The countries with the most leprosy centers are: in Africa: Madagascar (31), Democratic Republic of the Congo (26), Egypt (24); in Central America: Mexico (3); in Central America Antilles: Haiti (2); in South America: Brazil (18), Colombia (5), Chile (4); in Asia: India (216), Vietnam (15), Indonesia (9); in Oceania: Papua New Guinea (2); in Europe: Ukraine (10), Belgium (8).
The last Sunday of January, is the 69th World Leprosy Day. It was founded in 1954 by the French writer and journalist Raoul Follereau, who as the "apostle of lepers" fought against all forms of exclusion and injustice associated with leprosy. Today, leprosy is on the World Health Organization (WHO) list of neglected tropical diseases (NTDs). Although treatable, it remains a public health problem in several countries in Africa, Asia and Latin America due to precarious socio-economic conditions that favor transmission of the disease and make early diagnosis difficult.
The Italian association "Amici die Raoul Follereau" (Aifo) promotes initiatives for lepers throughout the year and the World Health Organization (WHO) published the traditional report on the situation of leprosy in the world at the beginning of September.

First, it should be noted that only 127 countries (out of 221) reported data for 2020, compared to 160 countries in 2019. The annual number of people diagnosed with leprosy worldwide is 127,396 (38.6% women), significantly lower than in 2019 (202,185 people), a decrease of 37.1%. However, this sudden drop is due to a drop in data collection during the Covid-19 pandemic and should therefore be interpreted with caution when calculating long-term trends. The Catholic Church has a long tradition of supporting lepers, who are often abandoned even by their own families, and has always offered them not only medical care and spiritual support, but also concrete opportunities for recovery and reintegration into society. In many countries, leprosy patients are still severely discriminated against because of the alleged incurability of the disease and the horrific mutilations it causes. Among the religious institutes that in their evangelizing mission have dedicated themselves to medical assistance and social reintegration of leprosy patients, in the past or still today, we can mention the Camillians (Ministers of the Sick, MI), the Franciscan Missionaries of Mary (FMM), the Daughters of the Sacred Hearts of Jesus and Mary founded by the Salesian missionary Blessed Father Luigi Variara, the Franciscans Minor and Capuchins, the Jesuits, the Consolata Missionaries, the Comboni Missionaries, the Missionaries of PIME, the Missionaries of the Immaculate Conception…. There are also several beatified or canonized missionaries who dedicated their lives to alleviate the suffering of leprosy patients. Among them, the Belgian Saint Jozef Daamian De Veuster SSCC, (1840-1889) universally known as the Apostle of the lepers of the island of Molokai. Having contracted leprosy himself, he died at the age of 49 after spending 16 years among the lepers. "Damien was above all a Catholic missionary", said Pope Benedict XVI in his homily on the occasion of his canonization, "Father Damien is known today as a hero of charity because he identified himself so closely with the victims of leprosy".
The German saint Marianne Cope, (OSF) (1838-1918) came from Hesse, entered the Congregation of the Franciscan Third Order of Syracuse (New York) in 1862, worked as a teacher, then as a nurse in hospitals and went to Hawaii in 1883, where she served as a nurse in the leper clinics of Honolulu and the island of Molokai, and worked for a long time with the missionary Damian de Veuster, whose work she continued. She died in the Moluccas in 1918 after spending 35 years with lepers.
Blessed Jan Beyzym S.I. (1850-1912) was born in what is now Ukraine and at the age of 48, with the consent of his superiors, went to Madagascar to devote himself to "helping lepers". He gave all his strengths, all his talents and all his heart to the sick abandoned, hungry and marginalized by society. He settled among them, to be with them day and night and through his pioneering work he became the forerunner of modern-day leper care. With the donations collected from benefactors and compatriots, he built a hospital for 150 sick people in Marana to heal them and give them hope. The hospital is still there today. (SL) (Agenzia Fides, 28/1/2022)

ASIA/CHINA - Towards Lepers' Day: the Catholic community in action, like all year round